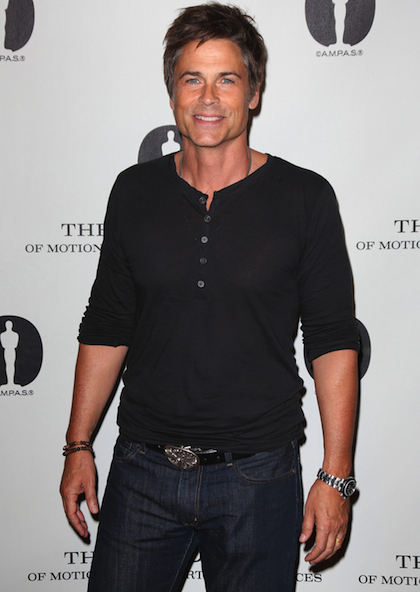 After his recent performance in HBO’s Liberace biopic, Behind the Candelbra, Rob Lowe will be undergoing yet another transformation — although not as dramatic — to play the honorable role of President John F. Kennedy in National Geographic’s upcoming film, Killing Kennedy.

In perfect timing with JFK’s birthday today, NatGeo has finally let us know of some pretty amazing stars that were cast in the two-hour original film on Kennedy’s life.

The film will feature Lowe as the President alongside Ginnifer Goodwin (of "Once Upon A Time" fame) as First Lady Jacqueline Kennedy and Michelle Trachtenberg ("Buffy The Vampire Slayer") in an all-Russian-speaking role as Lee Harvey Oswald’s wife Marina; Oswald’s part has not yet been cast.

Killing Kennedy is based on the 2012 best-selling book of the same title by Martin Dugard and Fox News host Bill O’Reilly. The film begins in 1959 at the time when Kennedy is announcing is presidential candidacy in Washington D.C., while Lee Harvey Oswald is renouncing his U.S. citizenship at the U.S. embassy in Moscow. The film chronicles Kennedy’s life as a member of one of the wealthiest and most powerful families in the United States, alongside his assassin Oswald, an ex-Marine and Marxist, until their lives collide four years later in Dallas, resulting in both of their deaths.

This is NatGeo’s second collaboration with O’Reilly, having recently aired Killing Lincoln, based on another of his books, which ended up becoming the most-watched program in the channel’s history!

Nelson McCormick of "The West Wing" is set to direct from Kelly Masterson’s script adaptation while Ridley Scott’s Scott Free Productions will be producing the film. Shooting is set to begin in June in Richmond, VA, with an anticipated premiere later this year that will coincide with the 50th anniversary of Kennedy’s assassination. The film will debut in the United States and globally in 171 countries.

If you can’t already tell, a trend has begun -- the channel will be continuing this new medium of filmmaking, a hybrid between documentary and drama, which they are calling “factual drama”. Word has already spread that Scott Free Productions and O’Reilly are working on adapting the next book of O’Reilly’s series titled, Killing Jesus.

In 2011, Reelz Channel aired a miniseries titled The Kennedys, starring Greg Kinnear as JFK and Katie Holmes as Jackie. Also due to debut this year, James Marsden and Minka Kelly will appear as the First Family in Lee Daniel’s The Butler, about Cecil Gaines, who served eight presidents as the White House’s head butler.

Who do you think will portray the 35th President and First Lady best?