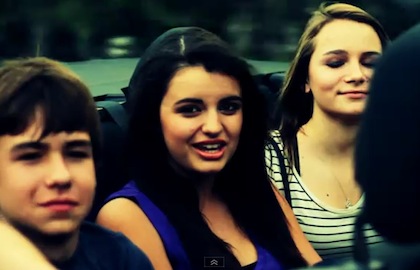 It’s been quite a week for Rebecca Black. You know, the one where Friday comes after Thursday and before Saturday? And it might only get better from here, thanks to an endorsement from none other than Simon Cowell.
Hot off a viral deluge focused on her personally-financed single and music video, “Friday”, the aspiring 13-year-old singer has been fending off haters left and right who have dubbed her snappy ditty about the best day of the week as the “worst ever.”
My question for many of those Negative Nellies would be: Could you do better?
My guess: probably not.
Say what you will, but Rebecca Black has brass cajones, and she's swingin'em. She is putting it all out there, and you know what? As long as you’re paying attention and talking about it, it’s all good. During a recent appearance on “Good Morning America” (yeah, haters, when was the last time YOU were on GMA??), she smiled charmingly as some of the comments about her video were read to her. In response to one comment that her “awful” song was stuck in the commenter’s head, Rebecca kept it positive and said, “I think that’s an accomplishment, you know? Even a person who doesn’t like it, it’s gonna be stuck in their head!” True that. Rebecca also humbly stated, “I don’t think I’m the worst singer, but I don’t think I’m the best singer.” She demonstrated this by singing the National Anthem a cappella, and I have to say, she is pretty decent! I’m thinking “Friday” doesn’t do her proper justice.
But, best or worst, she’s got some serious back-up in her corner. Simon Cowell was recently quoted as saying that he considered Miss Black a “genius” and that “Anyone who can create this much controversy within a week, I want to meet. I love people like that.” Take that phone call, Rebecca!!!
Here's the deal, you guys -- "Friday" is a song written by a tween for a tween. It's perfectly age-appropriate and reflects the everyday sentiments of a 13-year-old girl. So, why all the fuss? What should she be singing about, getting drunk and hooking up with high school guys? No thanks. It's a kid being a kid singing about kid things. I wish I could go back to a simpler time when my biggest dilemma of the day was deciding if I should sit in the front seat or the back seat!
And it would be easier to rag on Rebecca Black if she was a hopelessly self-unaware dimwit, but the truth could not be more to the contrary. Anyone who has seen the GMA interview or has been following her Twitter feed has to give the girl props for her good sportsmanship. A lesser person would be crying themselves to sleep every night into their Edward Cullen body pillow (or maybe that's just me). But this is one shrewd ‘tween, folks. She is plenty aware of her trending topic-worthy status right now, and she is riding the wave along with everyone else, keeping a smile on her face and her head held high. She will be back, and she knows you’ll listen! Even if it’s on a Monday.
If you haven’t seen it yet… where have you been?? Well, anyway, check out “Friday” below. You know you’ll be singing this into your hairbrush as you get ready to go out this weekend…
30 million views and counting don’t lie. Go on and get it, girlfriend!
(Image via Rebecca Black/YouTube)
- Katie Marzullo, YH Staff Editor
[email protected]