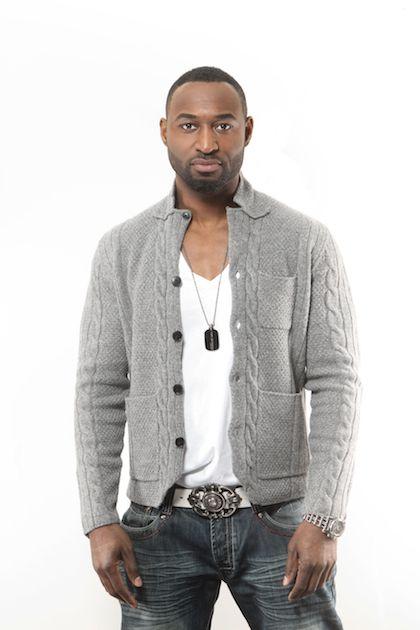 “I remember when I moved to Canada as a child, kids would come up to me and talk to me just so they could hear my accent because it was so unusual.”
Adrian Holmes, a Liverpool, England, native with a Bajan twist, is definitely a person with a unique background to say the least. When Adrian moved to Canada at a young age, he admitted that he was not always the outgoing and theatrical guy as he is today. You may have recognized Adrian in the CW series “Smallville” or on Fox’s "Fringe" and "Human Target."
Adrian Holmes has been an actor ever since he played the Cowardly Lion in The Wizard of Oz in elementary school. “I will never forget, when the play was over, a girl came up to me and asked me for my autograph, and that was really cool for me. Although, I thought it was odd because I wasn’t even famous.” Now that Adrian is well-known and has been included in many projects, he has been able to venture into new opportunities; some which include a list full of box office movies coming this spring.
I was able to chat with Adrian about a couple of films that he will be starring in this year. Those movies include: Frankie and Alice, starring Halle Berry, who plays a woman with multiple personality disorder; CatherineHardwicke’s Red Riding Hood, starring Amanda Seyfried and Gary Oldman; and Wrecked, starring Adrien Brody. Although I only spoke with Holmes about these three movies, he will be featured in a couple more that will be released at a later time. Take a look below at my interview with Mr. Adrian Holmes...
Q: What was your first big film that made you THE Adrian Holmes that people know today?
A: I think the first big role was probably "Smallville". I played the Basqat last season, and that really gave me a lot of exposure. A lot of people stop me nowadays and ask if that was me.
Q: You are featured in a couple new films this year, one which includes Frankie and Alice starring Halle Berry. Who do you play in the new movie?
A: I play Clifton, who is a DJ in a go-go club in which Frankie dances. Over time, we build up a relationship and attraction towards each other. However, my character is already in a relationship and has a baby. Frankie and me go out to get some drinks and then one thing leads to another.
Q: What was it like working with Ms. Berry?
A: There aren’t any words to really describe was it was like. She’s a class act woman and beyond beautiful. She was very sweet and humble. She made me and the rest of the cast feel really welcomed and equal. When I first heard I got the part, I was very overwhelmed but excited because this was my chance to make a great movie.
Q: In your second movie, coming out this spring, Red Riding Hood, you play The Captain. What was that like?
A: I am Father Solomon’s [Gary Oldman] right-hand man, basically. We are soldiers who have been summoned by a village and go on a hunt to find and try to rid this werewolf that is trying to terrorize us. However, the werewolf turns back into a human figure during the day, so it could be anyone in the village. So it’s very creepy and intense.
Q: Since the movie is so dark and gloomy/intense, what was it like on set when filming and not filming?
A: It was very, very light and fun on set. When doing a “dark” film, it's important to keep the atmosphere very light so you don’t get too caught up in the dark and gloominess of the movie itself. It’s important in this industry to have fun and not take things too seriously when on set. Lukas Haas would bring his guitar on set and would play some tunes, such as The Beatles, so it was definitely a lot of fun.
Q: In the third movie coming out in May, titled Wrecked, you star in the movie with actor Adrien Brody. Can you give a little summary on the movie and your role?
A: Well, the movie basically captures Adrien Brody being put in the wrong place at the wrong time. He He is the victim of a car wreck at the bottom of a ravine and has to battle the elements of nature while suffering from amnesia to survive. He thinks my character is there to help but finds out he's only out for himself.
At the end of interview, I asked Adrian to name off 5 things that he would want to do before he leaves this earth. Check out his response!
Adrian’s Bucket List:
Frankie and Alice is currently in theaters while Red Riding Hood will debut on March 11th. Wrecked with be released in the Spring.
(Photo courtesy of Karolina Turek.)
Brittany Johnson is the one who always has the inside scoop when it comes to anything in the entertainment world. She is a blogger and covers the hottest events in the D.C. area. You can follow Brittany for all the scoop here: @B_Lucky17.