"South Park" Masterminds Take Over Broadway with 'The Book of Mormon' 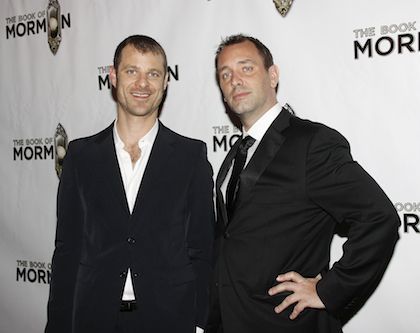 No one is left out of being made fun of to the creators of "South Park". Now it's the Mormons' turn.
Religion meets satire on Broadway -- “South Park” creators Trey Parker and Matt Stone, along with and Avenue Q’s, Robert Lopez, spent seven years creating The Book of Mormon. To date, this Broadway musical has won an incredible 14 Tony Awards, including Outstanding New Broadway Musical, Best Direction, Best Original Score, Best Book, and Best Choreography.
The Book of Mormon debuted on March 24 at the Eugene O’Neill Theatre in New York City. The producers released its album on May 17 on iTunes. Hard copies of the musical’s track will be available June 7 at the theatre.
The Broadway musical is about two young missionaries -- one fat and ugly, the other handsome and over-confident -- who are sent to Uganda to try to convert the people to Mormonism. Only one of them has ever actually read The Book of Mormon. The Ugandan people will have none of their preaching as they face issues like famine, poverty, murder, AIDS, not to mention a corrupt and murderous Ugandan leader. It is only when they stop preaching do the Ugandan people celebrate the religion and they are even baptized.
The "South Park" have said that they always wanted to do a musical, and that is why many episodes of “South Park” include the characters breaking out into song, or the musical-themed films South Park: Bigger, Longer, & Uncut and Team America: World Police.
So, why write a musical about Mormons? Could it be that Matt Stone had an awful breakup with a Mormon girlfriend back in high school? Or the enthusiasm during the extensive interviews with missionaries and ex-missionaries? Or the 2003 episode making fun of Mormons?
Whatever it was, Parker, Stone, and Lopez have created such a successful Broadway musical that it will be going on a U.S. and West End tour in 2012!
Kenny was not hurt in the making of this production.
(Image via Joseph Marzullo/WENN)
- Evelina Weary, YH Staff