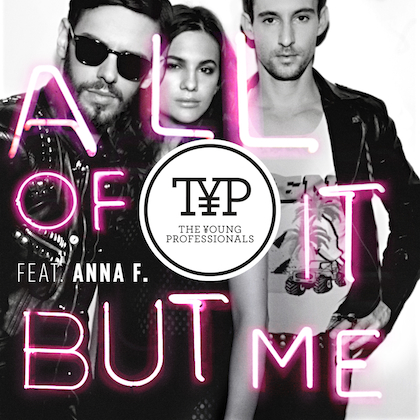 The Young Professionals is a Tel Aviv-based band comprised of Johnny Goldstein and Ivri Lider, who are determined to blur the boundaries of music and performance. With bumping electronic beats and evocative lyrics, they describe their style as “electro-pop”. Their first single, “D.I.S.C.O”, is what put them on the map with over 2 million hits to date!

I caught up with vocalist Ivri Lider to get the scoop on their new single, “All Of It But Me”, out today! He also gave insider details about the creative process behind the making of their second album, (which is in the works right now!) and how it compares to their first. Plus, he revealed to us how they come up with ideas for their music videos, and some of his favorite artists at the moment.

YH: Your new single, “All Of It But Me”, drops on February 23,What can your fans expect from this song?

IL: “All Of It But Me” is an up-tempo, electro-pop track where we do that thing we love doing, and that's playing between "indie", "commercial", "fun", and "deeper meaning" kind of thing. We had the privilege to feature the cool, talented and beautiful Anna F. on this track and on the video.

YH: What inspired the music video behind the new single?

IL: The video is trying to take that idea of "I would love to know what’s really on your mind but I can't" and bring it to life through a series of weird, interesting, [and] beautiful images.

YH: On your website, it says that you “create something new, always based on something old”. What, or who, do you base your sound and style of music on?

IL: We love listening to older music and getting ideas and references from it; sometimes, in a very direct way, like “D.I.S.C.O.”, where we actually sampled an '80s song and rewrote it. Or, just being inspired by sounds and vibes of that older music. Anyway, we feel that even if you're trying to create something new, you always have history to it.

YH: Your second album is in the works right now; what can we expect from it?

IL: It's a very up-tempo album; we keep going between different styles like we always do. We brought in some of our rock influences to mix with the electronica, and we feel that playing live the last two years also influenced the sound and vibe of the album.

YH: Can you tell us a little bit about the process of creating your second album? How does it compare to your first album,9am to 5pm, 5pm to Whenever?

IL: With the first album it was a longer process and [farther] apart. We were living in different cities and [a lot] of the work was done using different studios and the internet. This time, we live in the same city [Tel Aviv], and we can work in the same studio together. Also, this time being signed to such a major label like Universal gave us the opportunity to record and write with some really cool people from Europe and the U.S. and that's something that's definitely influenced the sound of the album.

YH: What goes on behind the scenes when it comes to writing music? Do you guys take turns writing, or sort of feed off of each other’s ideas?

IL: We definitely feed [off] of each other. We don't have one system of writing; it can start from different places, and we try to stay very open to each other’s ideas and directions. You have to trust and respect the people you write with because it's such an exposed and uncertain place to be; but we feel that after writing together for quite some time now, we can do it pretty well.

YH: Your music videos are very artistically-driven. How do you come up with ideas for your videos? Are they based around certain messages that you want to communicate to your audience?

IL: We love creating the videos. We try working with people [whose work] we know and love, like Guy Sagy, who directed “D.I.S.C.O.” and “All Of It But Me”. We [sit] together, discuss the song and start throwing visual ideas around. It's very important for us to leave a lot of space for the creativity of the directors we're working with!

YH: Who are some of your favorite artists at the moment?

Check out the music video for "All Of It But Me" below!