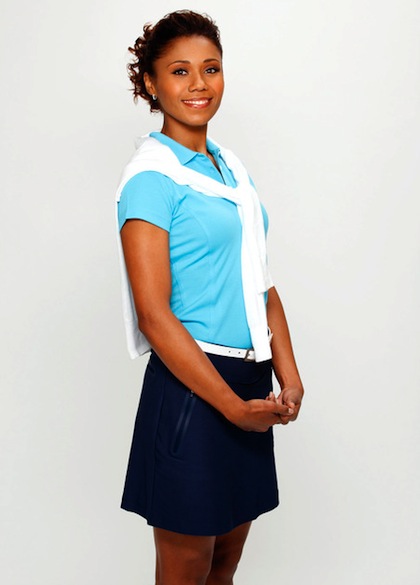 Toks Olagundoye is perhaps best known as Jackie Joyner-Kersee -- no, not the legendary athlete, but the loyal wife of an alien community’s Supreme Leader (Simon Templeman) in ABC's hit comedy "The Neighbors". Jackie is constantly baffled by Earth’s different customs, but she’s eager to try to adapt to the culture. Miss Olagundoye herself has had a bit of experience with adapting to new surroundings. Born and raised in Lagos, Nigeria, she moved to England when she was three, returned to Nigeria by the time she was five, and attended boarding school in England and Switzerland. In addition to starring on “The Neighbors”, Miss Olagundoye is the mastermind behind three separate (and very different) webseries: “AlphaSeries”, “Callbacks”, and “Yard Sale”.

Miss Olagundoye has one of the most pleasant voices I’ve ever heard -- and a delightfully twisted wit. During our chat, we discussed why gross things appeal to her, how to stay happy, and why supermarkets are interesting places to visit!

TO: It was wonderful. I’m an actor, and I had a job, probably the favorite job that I’ve ever had. They are lovely, intelligent people. I had the time of my life.

YH: Can you give us a possible sneak peek of what may happen to “The Neighbors” in the future?

TO: We don’t know if we have a second season yet. We actually have no idea what will happen until we get the scripts, and we don’t get the scripts until one week before we film the episode. That is mostly up to the producers, writers... we don’t have much of a say in it. That’s fine, we’re in very good hands. Everyone on the show is brilliant. So, I don’t really know. I’m sure it will be fantastic!

YH: Have you filmed an episode so far that is your favorite?

TO: I’ve honestly enjoyed every single episode. I did love the musical one, that was a lot of fun. I really liked “The New Jersey Housewives” one... But I really liked the John Hughes-themed one. I always wanted to do a John Hughes film, which obviously can’t happen. I grew up watching his films; he was one of the reasons that made me want to become an actor. It was a lot of fun. And a great experience for me to have.

YH: You are also a bit of a fitness and health enthusiast. Do you have any helpful health tips for us (especially those of us who don’t always like to work out)?

TO: I’m not really an enthusiast. I think to be enthusiastic about it, you have to like it, and I really hate it. I do it because I like it to be healthy, but I dislike exercise. There are things I would like to eat and drink and I don’t. I would like to be able to eat brownies every day. [laughs] I do not like exercise. I like the way that I feel right afterwards, and I like the end result, but I do not like exercise. I think that people feel if you have the discipline to exercise everyday, you enjoy it, but that is a far thing from the truth. Interestingly enough, my one tip for being healthy has nothing to do with food and exercise -- it has to do with stress and happiness. I believe that if you are stressed out and unhappy, you will not want to exercise anyway. The most important thing for me is making sure that my stress levels are manageable. I’m very careful about the people I allow in my life. If anybody is negative, or adds too much strain to my life, even if they are family members, I make sure to put them at a distance. Life is hard enough; there are things that you can’t control. I do believe in communication. I believe that you have to take time for yourself. It’s funny that I’m saying this because I’m an overachiever and a workaholic, but you do have to do things that make you happy. You have to find those things that make you happy. Even if it’s just sitting on the couch watching television, you should allow yourself time to do that. That’s probably the main reason I eat as well as I do. A lot of the preservatives and sugars add to your stress levels, and I’m a naturally anxious person, so I try to focus on the happiness and that this is the one life I have to live, so why not make it as pleasant as possible?

YH: You had quite an interesting childhood. You grew up in Lagos, Nigeria, then moved to England, Switzerland, and then to America. Did you bring any of your own background into Jackie?

TO: Yes and no. We lived in Nigeria, where I was born and brought up, and my parents still live there. My dad is Nigerian, and my mum is Norwegian. We lived in England when I was three and four, and I went to boarding school there. So, the three places I’ve only really lived were Nigeria, England, Switzerland. We also spent a lot of time in Norway, because that’s where my mum’s from. I’m not sure if my background in any way has helped me play Jackie, but I do identify with her because of it. Not really because of where I grew up and how I grew up, but from living in a different place from where I grew up. It is difficult to move to a different place and it’s a very different culture to feel settled. I still at times feel unsettled. I didn’t grow up watching the same television shows; we did get some American television, films, and music. Nigeria is a third world country. At times, we wouldn’t have electricity or plumbing, water wouldn’t be available. We didn’t have milk or bread, just because of where we were. Because of that, I identify with the fact that Jackie not knowing what’s going on. But also very much like Jackie, I do believe in staying with my own culture, beliefs, and the way things are done at home, but incorporating largely the culture of the place that I am. I believe that if you go somewhere, you should try to integrate yourself. For example, I work in my British accent, but when I’m walking around, I speak in an American accent. I do have an American accent that no one can see through. I do believe blending in is a good thing. I’m not very good at sticking out; I don’t like to draw attention to myself. I think that Jackie ends up attracting attention because she does something horribly wrong, but she does try to fit in and tries to learn about what’s going on. She is so fascinated by the culture, and wants to learn about it. She wants to do the right thing, and fit in with the new people around her. And I identify with her for that.

YH: You have mentioned that your accents have changed over time, and that you can switch between accents. Is there a particular accent you are doing for Jackie?

TO: There are three accents that I swap between. My natural accent is a Nigerian accent, because that’s where I was born, that’s where I was raised. My second accent is a British accent, because we lived in England when I was three and four. My third accent is an American accent because I went to American schools growing up. I’ve had some issues during auditions, because people will tell me to do it in my natural accent, and they have to tell me which one, because my accents change depending on who I’m talking to. Jackie’s accent is a throwback accent. I’m not sure that it even exists in England anymore. It’s very proper. It’s not quite the Queen’s English, but it’s a bit like movie star British. It’s not the way that I speak with my English accent. It’s very theatrical. Simon as well -- he doesn’t have that British accent either. We both have a very theatrical way of doing it.

YH: “The Neighbors” is partly about people finding places that are normally considered dull to be exotic and interesting. You yourself have moved around a great deal. Are there any places that you have been that may be considered boring yet you found interesting?

TO: When I first came to America, I thought that supermarkets were quite interesting. We didn’t have anything like this in Nigeria. If you wanted, say, deodorant, you went and there was one, and you would take that one and then leave. There was not a lot of choice. But other than that, I would have to think about that one.

YH: In addition to being an actor, you are a writer and a producer, and you have helped create a few different web series. Can you tell us a bit about that?

TO: There are three webseries; I fully created all three -- “AlphaSeries” are basically shorts, that have nothing to do with each other, and each one is named, like, "A is for Audition". It’s just a group of little independent, silly films. “Callbacks” is a series that will be finished in two months and will finally be released in the summer. It’s about a casting agency; it’s very funny. And the last one, “Yard Sale”, I’m not even sure how to describe it. It’s about these four girls who are dating. There’s nothing appealing about these girls. It’s “Sex and the City” and “The League" as one. Everything that I think is gross, I make fun of everybody. I have a very dark side. I tend to see the gross, dark side of things, and that’s the way that I go with things.

YH: How do you keep from laughing when the green goo comes out of your ears?

TO: Well, I’ve only had to deal with it once. Honestly, it’s very basic, it’s a technical effect, which is done on set. We can’t laugh -- if you do, you will mess up the shot. You don’t want to be the idiot who laughs and messes up everyone’s day. To re-shoot it would literally take 45 minutes. You just have to buck up, be professional, and get it done.

Find out what Toks's "The Neighbors" co-stars had to say about the show when YH took a visit to the set: