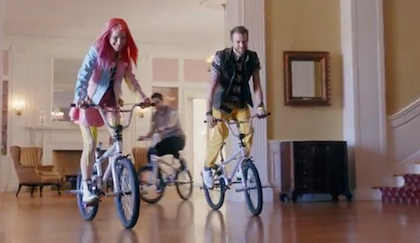 Paramore’s got a new album, a new single, and a new music video, and peeps be going cray!

Seriously, my Facebook, Twitter, and Instagram feeds blew up overnight with friends going bonkers over “Still Into You”, the second single off their self-titled 4th studio album, which was just released late last week. Fans have been waiting FOUR YEARS for the follow-up to the band’s 2009 gold album Brand New Eyes; following some inner strife and personnel changes – including the departure of founding members Josh and Zac Farro – their future seemed up in the air, even though frontwoman Hayley Williams never wavered from maintaining that the group would move on and be stronger than ever. And, apparently, it was all worth it!

Paramore has been receiving some really great critical praise, not to mention the aforementioned social media buzz. What people seem to love most about the album is the mix of genres which keeps listeners on their toes. Their lead single, “Now” (released in January), was typical Paramore fare – guitar-heavy emo rock with flavors of ‘90s-era Garbage or Hole.

Then there’s “Still Into You”, which feels more Katy Perry than Courtney Love! The music video finds Williams surrounded by balloons, ballerinas, bicycles, and birthday cakes – certainly not typical! But it’s definitely a lot of fun. I can see why people are digging it. Check it out below – what do YOU think of this perky Paramore??

(Image via Fueled By Ramen/YouTube)