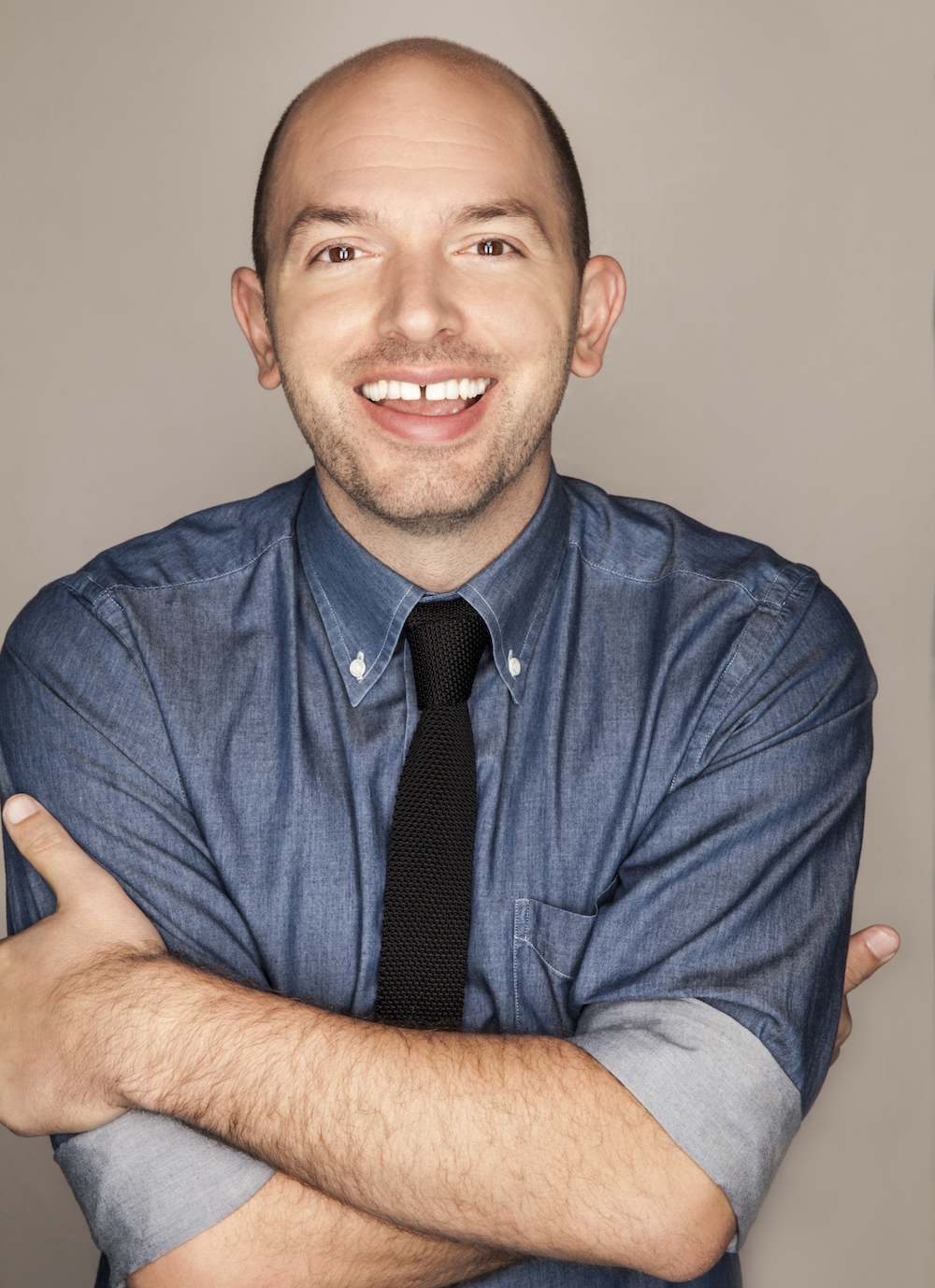 On the hit FXX show “The League” which is currently airing its final season, comedian Paul Scheer plays the rather flashy Andre, who, despite being a successful plastic surgeon, is constantly teased by his fantasy football buddies.

In addition to the “The League”, Scheer has two new movies coming out and has had roles on “The Hotwives”, “Wet Hot American Summer: First Day of Camp”, and “Burning Love”. He also stars as the adorable Mitch, a waiter at Cattleman’s Ranch on the ABC sitcom, “Fresh off the Boat”.

In real life, Scheer has the personality and charm of a natural comedian. He is able to do silly voices (including a spot-on imitation of Andy Cohen) at the drop of a hat and is able to crack jokes at a rapid speed without sounding as though he is trying. He was even polite enough to laugh heartily at my own jokes (which was quite kind since I am not that funny).

During out chat, Scheer described what it has been like to say goodbye to “The League”, how he got his start in comedy, and why he prefers playing oddballs:

YH: How does it feel having “The League” come to an end?

PS: It’s been a real bittersweet moment for all of us. I think we were all a bit shocked by all the tears shed on the last day of shooting. Now that it’s over, it’s been a couple days in, you kind of feel like you were dumped by somebody. It’s a real mix of emotions. It’s like, "Wait, I’m not going to go back to that?" You don’t realize how good you had it until it’s over. Maybe I should just combine it all and say that it’s like being dumped by a girl that you dated at summer camp.

YH: Andre on “The League” is a rather superficial character. Do fans ever assume that you are like him when they meet you?

PS: Yeah, 100%. I don’t know if they think I’m superficial as much as that I feel like people immediately have a kinship with the characters from “The League”. Wherever I go, I get "Andre! Andre!", and if, god forbid, I wear anything that would be suspect, then it’s like, “Oh that’s an Andre jacket!” I think, “No, it’s not, it’s just a blue jacket that I’m wearing.” I wore a hoodie one time on TV. It was literally a navy blue hoodie, and they said, “Huh. Total Andre!” I feel that this has made me be a much more conscious dresser. I can never wear a hat, besides a baseball cap. I can’t wear anything that has any sort of flair. So, pocket squares are out (not that I’m a big pocket square wearer), but anything that has just a little bit of flair, I have to run in the opposite direction from it. I just don’t want people to say, “Oh you do dress like him!” I think what we get (all of the cast) is that people feel like we’re their friends. I get more casual people coming up to talk to me, and I think they are surprised that I’m not Andre.

YH: Tell us a bit about your two new films, Army of One and One Shot.

PS: Oh yeah, for sure! Army of One is a movie that is directed by Larry Charles and stars Nic Cage. It is a comedy based on this true story about a guy who is just a house contracter who decides that he is going to go off and kill Osama Bin Laden. He has no skills at all. It’s based on a GQ article. Basically it’s the most inept person trying to kill one of the most hunted men in the world and his attempt at doing that. Spoiler alert! He doesn’t succeed. It’s a really funny story.

The other one is called One Shot which is with Topher Grace. It’s a bit like Birdman. It’s set in the world of a musical Broadway show. The  show is about one-hit wonders. The music in it is amazing. It’s all these classic songs from '80s and the '90s. JC Chavez is in it (he was in *NSYNC). The idea is he is on Broadway doing this part, sort of like David Hasselhoff with Dr. Jekyll and Mr. Hyde. It’s really fun. That should be a blast.

There’s a third movie too! The last one stars Will Ferrell and Mark Wahlberg and is called Daddy’s Home. It comes out at Christmas. I only have a small part in it. We shot it in New Orleans Pelican Stadium during an NBA game. No one quite knew we were shooting it.

YH: In “The Hotwives” series, you parody Andy Cohen with a character named Matty Green. Did you do any research on the actual Andy Cohen in preparation to play Matty?

PS: Well, there wasn’t much research needed in the sense that I am a huge “Housewives” fan. I had a very important distinction in “Housewives” history. When Andy Cohen was doing “Watch What Happens Live”, my friend is a producer on that show, and she said, “Why don’t you come and watch the show?" The show was Joan Rivers. Andy told us to come and laugh and do whatever we wanted. My wife [June Diane Raphael] and I started laughing so hard that Joan Rivers started playing to us. After that show, Andy Cohen said that he needed an audience for “Watch What Happens Live”. I like to think of myself as having added a little bit to the Bravo family with my off-camera appearance in that show. I am a huge Andy Cohen fan. I loved his appearances on Howard Stern. I wanted to make sure that Matty was similar, but not an exact imitation of Andy Cohen. I think what’s so fun about Andy Cohen is that he has this infectious energy and positivity while asking the most damning questions, like “Oh my gosh, people hate you, and they call you a piece of $#!t!!! How does that make you feel?!!” It’s like, "What do you think? It makes me feel terrible!" But he does it in such a disarming way that it makes me laugh every single time.

YH: You tend to play rather eccentric characters. Do you prefer playing oddballs, or would you rather play a more normal character?

PS: I think a lot of the times, when you’re the normal person in comedy, you’re the straight man and you don’t get as much fun stuff. You may have more screen time at the end of the day, but I think the real goal is to find something grounded in some reality but has some quirks to it. I feel like, with the stuff that I have done, I tend to gravitate to those types of characters because there is more to do. I think anyone who does comedy wants to find parts that are a little bit more meaty. I think that, even if you went to people like Daniel Day-Lewis or Ryan Gosling, they’re looking for something that involves a big character choice because it makes it more interesting. At least from a comedic standpoint.

YH: You have a bit of a background in improv. Do you have any advice for people who are just starting out in improv?

PS: I began my whole career in improv. I did this whole show called Chicago Three Limits, which was this Off-Broadway comedy show that I did straight out of high school. I was the youngest member in their troupe. I toured around the country with them when I was in college. Then I got hooked up with UCB [Upright Citizens Brigade], and they have been really defining in my life. There are a lot of people who I met there that I perform with now, like Rob Riggle, Rob Huebel, and Aziz Ansari. The thing that I have learned and what I have taken away from improv is all about making your partner look good. It’s about building something together. It’s a collaborative, not a competitive, world. When you’re in a real-life relationship, when you are doing something that is not creative, these kinds of rules you can always use. The number one rule is "Yes, and". Every time your partner says something, you are supposed to say "yes" to it and add to it. It really helps in all aspects of your life. When you’re relying on your partner to make you look good, and you’re trying to make your partner look good, you both end up looking really good. Maybe in the stand-up world, it isn’t apparent, because the stand-up world is all about getting your own laugh and your own thing, whereas everyone in the improv world needs to look good in order for the show to be good. That’s something you can bring to every element of your career. I think it’s why I like to produce a lot.

YH: Any updates on what might happen to your character Mitch on “Fresh off the Boat”?

PS: Mitch is out and about. This season, since the restaurant has taken a bit of a backseat, Mitch has come into the real world. We just shot the Christmas episode. The fun thing about the Mitch character as he pops in and pops out is that we find out this season that he has a relationship with Eddie, unbeknownst to the dad. Mitch has been hanging out with the kids and having a good relationship with them. We learned that, earlier in the season, he likes surprise parties, and that worked against him when Constance Wu punched him. It’s been fun. The best part about “Fresh off the Boat” is that they have been great working around my schedule. They have been writing me in when they can. Now that “The League” is over, I am going to try to do more of that show. I love that show.

On a side note, Rob Huebel and I have been doing this live comedy show called “Crash Test” where we do a bunch of bits. We recently shot our first comedy special of that show, where we took that show and put it on a moving bus. We bump into people like Aziz Ansari, Aubrey Plaza, and Rob Corddry, and we have a live performance by Earl Sweatshirt. Jack McBrayer is in it. It is a big, fun, experimental comedy show that was improvised. It’s available now on iTunes and Vimeo.

You can keep up with Paul Scheer on Twitter, and don't forget to tune in to "The League" every Wednesday night on FXX!