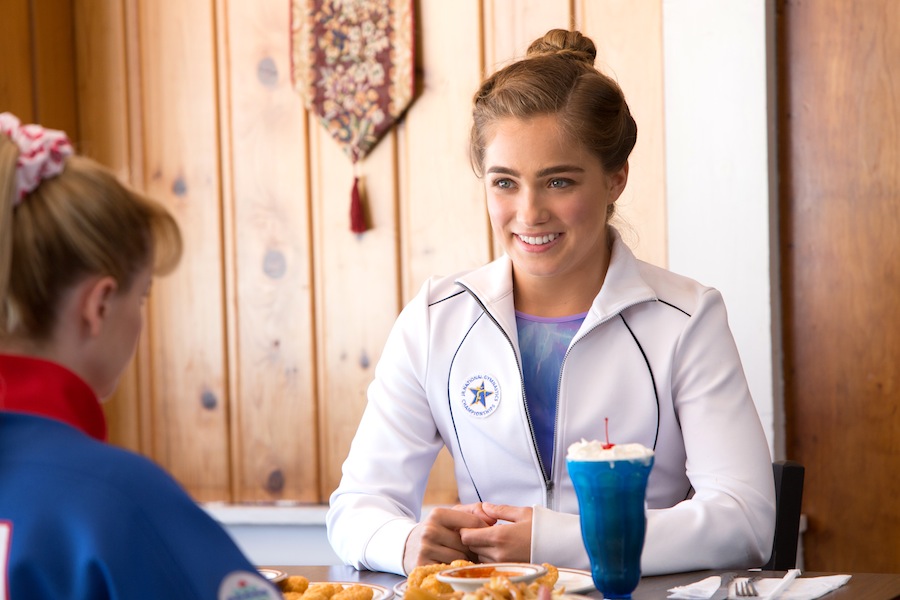 This one has us doing flips and turns, guys! Miss Haley Lu Richardson stars in Melissa Rauch’s comedic Sundance hit, The Bronze, and let us tell you, it's a real winner. All puns intended!

Haley Lu plays Maggie Townsend, a sweet, aspiring gymnast born and raised in a small town in Ohio, hoping to win the gold at the next Olympics. When her gymnastics coach abruptly passes away, Rauch’s character, Hope, steps up to the plate to coach Maggie to take home the gold. Though bitter about not winning the gold herself, bronze medalist Hope doesn’t appear genuine while working with Maggie. Will Maggie grow on Hope?

We got a chance to talk to Haley Lu herself about filming this movie; take a peek!

YH: In what ways are you similar AND different from your character Maggie? Do you find her relatable at all?

HLR: When I first read Maggie and was putting the puzzle together in my mind of how to be her, I just kept picturing a little puppy dog. She is just so bubbly and innocent and very naive. I like to think I am happy and innocent as well. I think it's important to hold on to some of that raw innocence and purity we are born with, but I like to think I'm a lot smarter and more grounded than Maggie. She is so swayed by the people around her, and I'm pretty firm in my decisions and what I know is right.

HLR: Okay, first of all, she was not just a "stunt double" -- she was an NCAA woman's gymnastics champion and her body was an actual rock and she could do the most unreal flips and tricks, and I swear she was literally sent from heaven. I have had awesome stunt doubles on other films, but I've always had an obsession with gymnasts, so working with them was so cool for me!

YH: You’ve mentioned that you’ve been a dancer for quite some time, and you have danced competitively! Did having that dance background help you with this role at all?

HLR: Oh definitely. Even though dancing and gymnastics are so different, they have a lot of fundamental similarities, like flexibility, strength, and pointing your toes. The form is very different, though. As a dancer, you're trained to reach through your limbs and lengthen, and as a gymnast, you have to be very tight and compact in your movements to have the speed and power. That was hard for me to get the form of a gymnast 'cause I'm so used to holding my body a certain way. I trained with the gymnastics stunt coordinator for over a month before we started filming.

YH: We heard that your audition day for this role was a bit hectic. Can you tell us about it?

HLR: [laughs] Hectic is an understatement in my opinion. I am always pretty on-time to places -- well, auditions at least -- but for some reason, I had a different address in my mind, and long story short, I was over 30 minutes late for my meeting! I was throwing sides and makeup and maps around in the car, and when I finally got there, parking was so confusing, so I somehow managed to park in this random sketchy spot five blocks away. Then I ran into the audition completely frazzled and out of breath. I got through the read and they were all so nice, I was like, "why aren't you mad at me?!" I'm now convinced that they thought it was some master plan I had to seem more nervous and bubbly like my character, but nope, I truly just screwed up. [laughs]

YH: How was your experience working with Melissa Rauch?

HLR: She is genuinely the sweetest person I have met in this industry. That's the first thing that comes to my mind when I think of her. She always had my back on set, she truly looked out for everyone.

YH: Was it hard not to laugh during some of the scenes in this film?

HLR: Oh I definitely couldn't hold it in sometimes. But it was fun with my character 'cause I feel like she would laugh at some of the things Hope says to her, just out of admiration and discomfort, so sometimes I would just start laughing and go with it.

YH: You mentioned that there was some improv done in some of the scenes; can you give us some examples?

HLR: Something I have learned is that every set and every director is unique. Some writers and directors love playing with the material and improvising, and others are really glued to what is on the page. For me, there are pros to both. There is a comfort in knowing what exactly you have to say, and there's a thrill to just kind of being in the moment and seeing what comes out. On The Bronze, Melissa, [co-writer] Winston [Rauch], and [director] Bryan [Buckley] were all into doing alternative lines and improvising. We would try something different in most scenes. It was really cool for me to watch these actors that are so good at being funny do their thing and just react to whatever happened.

YH: In the film, Melissa’s character fell and was injured. Have you ever had a similar experience happen in your dance career? If not, were you ever afraid of this happening?

HLR: Oh my goodness, I swear I was injured every year when did competitions. I feel like I got hurt more than most of my friends too now that I think about it. [laughs] I had hip injuries and was constantly going to physical therapy. I've already gotten knee surgery and I have permanent foot damage. Fortunately, I was never severely injured to where I had to stop forever. There are risks you take. though. being a dancer, like with most worthwhile things.

YH: How do you prepare for a long day of filming? Do you have a pre-filming ritual or prep that you do to keep yourself focused?

HLR: Getting good sleep is super important to me. I know, the boring answer, right? I think with each project and role, it's a little different. I guess just small internal preparations that get me into the mindset of the character. One of the reasons I love acting so much is 'cause it forces you to leave all your own struggles at home and sucks you into this totally different world, so completely opening up and giving in to that feeling is how I prepare.

YH: Your first role as a kid was a “Town Crier” in Cinderella. Did you know from this very role that you wanted to be an actress?

HLR: Oh Town Crier #2. [laughs] I literally had one line. I think I knew way before then that I was supposed to be an actor, it was just everyone else that didn't know. It was hard for me to get the "lead roles", even in school plays. I don't know why. Maybe it was because I was a little shy back then; I mean, I was really outgoing, but when I got on stage or had to give a presentation in school, I would freeze up. Or maybe it was because I had a unibrow and a bowl cut.

YH: At what point in your career did you decide that acting was your passion?

HLR: I had a passion to act before I even moved to L.A. I had this thing in me that was just guiding me there; it felt stronger than a craving or a want or even a dream. I just knew I needed to follow this "thing". Then once I moved and started experiencing and learning, it just clicked.

This is one you don’t want to miss. The Bronze is tumbling into a theater near you on March 18! For updates on Haley, be sure to follow this rad little lady on Instagram!