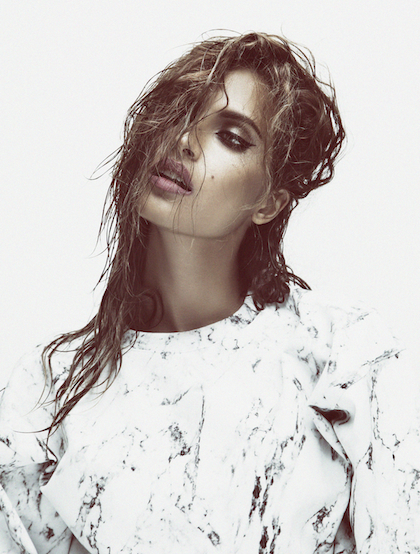 Beautiful girl, beautiful music, beautiful soul – that’s what springs to mind when music by Snoh Aalegra comes through our speakers. This Swedish talent is about to take America by storm with her “rocking soul” music, and we got to chat with her all about it.

She just recently performed her first headlining show in L.A. upon the release of her new single “Emotional” with singer James Fauntleroy. We were lucky enough to hear first hand about that experience while getting to know Snoh and her rise to the top as a true artist.

Check out our interview with Snoh to get to know her and the inspiration behind her music if you haven’t already. Plus, find out which pop king she’s been lucky enough to learn from; we’re just a little bit jealous, to say the least....

YH: You just did your first headlining show in L.A.! How was that?

SA: It was pretty crazy. The line started building outside at 8, and I was like, "What’s going on?’ – that was such a cool thing to experience. I did the show with James Fauntleroy -- he opened up for me, and he’s always been my idol, so it was super cool to do a show with him. He’s definitely one of the best songwriters and voices in the game, in my opinion, and we had a lot of fun. We definitely want to do that again!

YH: What would you say most of your music is a reflection of?

SA: Definitely my own life. I’m telling my own story and the things that I’ve been through so far on this album. You never know what I’ll do for the next album, but I love storytelling lyrics, and sometimes it’s cool to get into character of the story; I just always have to relate to it. So far, I’ve definitely been telling my own story. I want people to get to know me, who I am and where I’m from and stuff like that.

YH: What is your favorite song from There Will Be Sunshine and why?

SA: My favorite song off that EP is actually “There Will Be Sunshine”, because it’s one of the most personal songs that I’ve written, and the emotions that are involved in that song and the lyrics are a little bit... just kind of painful to me, so every time I perform it, I feel it so much. It’s so real to me, so that’s the most special song off of that EP for me.

YH: Tell us about your song “Emotional” – give us the run down of the song and what it’s about.

SA: Well, “Emotional” is about wanting to be loved so desperately. I actually recorded it when I was going through a really sad breakup. I just got out of a four-year relationship, so when recording that song, those real emotions came out. And I had to do the video not too long after I recorded the song, and it was actually real tears and everything was just really real. I don’t mind putting my heart on my sleeve when it comes to my music. I can put my emotions out there, but it’s different when meeting me as a person, because I don’t open up as quickly. But I put it all in my music.

YH: Who are your musical inspirations?

SA: The number one is obviously Michael Jackson because, well, I don’t really feel like I have to explain that, haha! He’s the best performer of all time, he has so many hit songs, and I’m just so intrigued by him and his whole journey. From being in the Jackson 5 and everything that happened to him, everything from his music, his personal life, his performances, how he’s such a perfectionist and his work ethic. I mean, he rehearsed for his “Smooth Criminal” music video for 3 months before it was actually shot, and just things like that. He’s just so interesting and fascinating to me – there is nobody like him. I’m also inspired by huge singers like Whitney [Houston], Mariah Carey, and Celine Dion. I’m very, very inspired by people like that, but I’m just so drawn to performers. I’ve actually been very lucky to be in touch with Prince. He called me about a year ago after discovering me online, and since then he’s been flying me around to different shows, and we’re about to work as well, but I’ve gotten to see him with my own eyes right next to the stage, and he’s just mind blowing. He’s such a perfectionist and a true master of his craft.

YH: Would you categorize your music in the Pop genre or something different?

SA: It’s actually such an interesting conversation, because obviously everybody wants their music to be popular, that’s what you want, but Pop is so different now. I was actually looking at a Billboard Hot 100 chart from like the '80s, and all of that was pop – at the top there was like Madonna, Prince, Stevie Wonder, Sting, and they were all on the same chart competing, and that was what Pop was – Michael Jackson was Pop – but now Pop is something else, and a lot of people don’t want to be called Pop because of what it is. But I feel the foundation of my music is definitely Soul, and then I don’t know what the subgenre would be, but my EP was, like, Soul-Alternative. I would say myself that it’s like “rocking soul” – instead of rock-n-roll, it’s rocking soul because I have a lot of instruments in my music and a raspy voice and I don’t know, I just feel like it has those “rocking-soul” elements. And if that’s Pop, and that’s what people want to call it, then that’s cool – I don’t mind it. Haha!

YH: If you could collaborate with one artist or group, who would it be and why?

SA: I would really love to work with Drake because I’m a huge fan. Drake is someone I listen to a lot. And also The Weeknd, I love that New Wave of music they’re bringing in. But when it comes to features, I want it to match the song, I don’t think it’s so much about who when it comes to features but more about the song and who would do well for that song. I also really want to work with Damien Marley. He’s one of my favorite artists, and I just love what he’s about and what he stands for. He’s an amazing lyricist and he’s very political. He just does his thing and he’s never changed.

How could anyone not believe in an artist that Prince believes in…? Exactly. AH-MAZ-ING. If you like any kind of music that’s has both Soul and Pop-ish vibes with an R&B twist, then you will LOVE Snoh Aalegra. Her newest single, “Emotional”, will have you dancing and singing at the top of your lungs in no time – we know we are! #OnRepeat

If you haven’t done so yet, be sure to follow Snoh on Instagram, Twitter, and on Facebook to see what music is coming next and where and when she might be taking the stage in a place near you. I mean… if Prince is keeping up with her talented self, so are we!