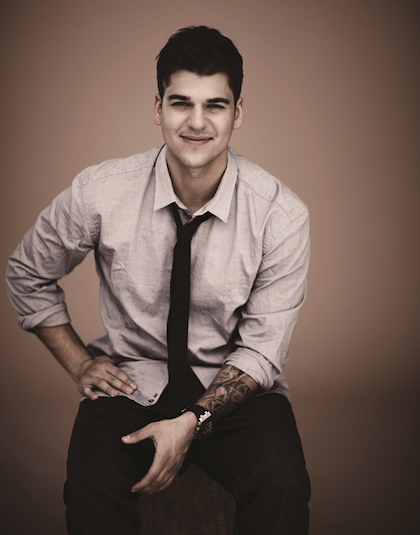 Rob Kardashian is one of television's most beloved reality stars on E!'s smash hit show "Keeping up with the Kardashians". For six season, we've watched his sisters build a global empire that has become one of the most successful celebrity-driven brands around. But at 25 years old, Rob is emerging as not only a businessman in his own right but standing out from the shadow of his famous big sisters. His new sock line, Arthur George, has been a hit for luxury retailer Neiman Marcus, and the brand will soon expand into other ventures.

Rob took a break from filming the new season of "Keeping Up..." to talk exclusively with us about his new business venture,Kim's new baby, and how he deals with all the haters.

YH: First I would like to say congrats on the new sock line. It's a great product. How did it feel to have your first business venture picked up by Neiman Marcus, one of the leading luxury retailers in the United States?
RK: Thank you very much. I'm super thrilled about having Arthur George at Neiman Marcus. My sisters aren't even at Neiman's, so for me to have my own area is just very rewarding. I've always been a fan of Neiman's, it's very high-end. My dress socks being there is the best thing that's ever happened to me. I'm trying to get into the fashion industry and really just focus on that. Socks are just the beginning, but it's something that me and all my boys have always rocked playing basketball or running track. We always wore funky socks; now I feel a lot of people today are into it. Even for the all star games, they did crazy socks. I definitely think it's become more accepted and it's something that I can be passionate about. I'm happy that things are going really well. We're also going to do streetwear as well.

YH: Will the streetwear stuff be available at Neiman's as well, or are you looking to sell it in a different type of location?
RK: The streetwear on our website will be on our website and filtered out to a few different places. I have a bunch of friends who own certain street wear companies like Diamonds, Crooks and Castles, The Hundreds, etc. I have some really cool artists likeCurtis Coolidge -- he does the Love Me stuff. I'm gonna do collabs with a bunch of different people. A lot of my friends' companies have socks but they don't have anything too crazy going on. So, it's gonna be great to get these different collaborations going.

YH: Did you feel a lot of pressure starting this new business trying to separate yourself from your family? Did you have a lot of pressure to really get this going? Or did you know you wanted to take your time and do it your way?
RK: There is a lot of pressure because my sisters' lines are all doing so well, so I didn't want to start something and not have it do well. So, there is that pressure to do well. I took myself out of their circle; I'm doing socks right now, and it will build into other things. I even chose the name Arthur George to keep people from mixing up my sisters' stuff with mine. I could have used my last name, Kardashian, but I didn't want to drain everyone with that. I'm just trying to do everything organically and take my time with it. It's doing well right now, and I hope it continues to do well.

YH: You've spoken about potentially doing something at DASH Men's; is that still something you want to work on?
RK: I am working on a lot of different things fashion-wise. DASH Men's is something were talking about. We get a lot of customers who go to DASH and ask about when we're doing a men's store. I think I just want to keep getting more used to the fashion business and how things work, attend all these trade shows... Next year, I'm going to do all the fashion trade shows, I want to really have my feet on the ground before I jump into something. It's also why I did just socks. I didn't want to overwhelm myself and do something I don't know or I'm not passionate about. I wanna start slow and take my time with it.

YH: One thing I talked with your sister Kim about when I interviewed her a little while ago was about work ethic. You guys have a reputation for being not only very business savvy but hard workers. You talk about taking pride in your work and have a strong work ethic from your Mom and Dad, it's something you highlight a lot in your TV shows.What would you say is an important lesson to learn as a young entrepreneur?
RK: I'm 25 and I've been through so much already in my life. I feel like I've had so many different lives already just through relationships and obviously everything with my family. There are so many people who want to put you down; we hear so much negativity. When you're doing well, people always want to put you down. Right now, I have the #5 product at Neiman Marcus, and I'm not even at where I want it to be. So, it's only going to get better. My advice is just never listen to what all the haters say, and I feel like, in our family, we just live by that because we hear it a lot.
My dad was a very big part of us being successful entreprenuers. He was a businessman, he had lots of different businesses. He would tell us every week, "Set aside twenty dollars, or every month set aside this much and put it in the bank and never touch it." He taught us a lot and gave us that business mindset.

YH: Obviously your family has had a great deal of success, and you guys are vocal about how appreciative you are of it all. But why do you think the Kardashian name is still such a hot topic? And why people seem to show either a lot of love or hostility towards your family?
RK: We currently just started our 7th season of "Keeping Up with The Kardashians", and we have our other spin-off shows. I feel like people can actually relate to our family. We're not scripted, and when you see a lot of other reality shows that are so crazy, so fake, and have so much negativity, that's not us. When you watch our shows, you're just watching us do what we do. We're big on family, we're very real. People who love our show, they can relate to us in some way.

YH: How is your sister Kim doing with her pregnancy? Are you guys excited about the new baby?
RK: Of course! It's obviously very fresh and everyone is super busy. I think she's done traveling; she was trying to get all of her traveling out of way. Now we're all getting time to spend with each other 'cause she can't go anywhere. So, it's a pretty awesome experience. We've been through this with Kourtney, it's always a beautiful thing. She's really excited, but I don't even think she knows how much it's gonna change her life yet. But we're all very excited.

Want to learn more about Rob's new sock line Arthur George? Not only can you order these swanky socks online from Neiman Marcus, but Rob just launched a brand new website for his line! You can also follow Rob on Twitter!