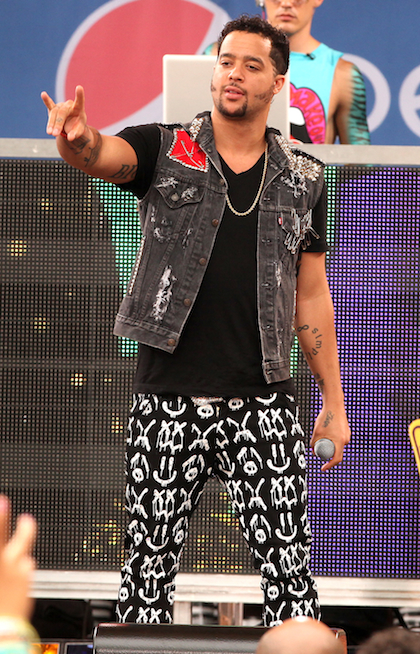 SkyBlu is one-half of the infamous, cheetah-printed duo LMFAO. In addition to party-rockin' with his uncle, Redfoo, SkyBlu and his friends recently launched a music collective called Big Bad University, which consists of a talented group of musicians, producers, and songwriters, including Shwayze, Mark Rosas, and Chelsea Korka. Their latest track, “#sexsong”, is a sultry, fun little ditty produced by Rosas and SkyBlu, with all of the proceeds going to support HIV/AIDS research. The second song, “Small Potatoes”, is a bass-heavy record that was surprisingly inspired by the BBC kids show of the same name. SkyBlu chatted with us about this new second family, working with his uncle, and what’s next for the group!

YH: Can you tell me a little bit about Big Bad University? How did all of you come together to form it?

SB: We saw a lot of groups in the entertainment world, like Young Money, and they all work together on certain things. University is really like a life label. We’re a group of friends who really want to be great, and every day we work with each other and inspire each other to get better. The thing about Big Bad University is that we’re a family, we’re always pushing one another to get better. We always push for love and unity. We all live together in one huge house. It’s a lot of fun. You know that movie, Camp Nowhere? We have University Nowhere. We have fun 24/7; we create music, create inventions, and have a blast. It’s a hell of a lot of fun! [laughs]

SB: [laughing] Well, Shwayze and I were watching cartoons one day, and that show came on, and we heard the theme song of it and felt inspired. One of the other people in Big Bad University is Mark Rosas, and he heard it too and said, “Hey guys, let’s flip that 'Small Potatoes' song!" And then I came back from out of town and heard it and was like, Oh my God, this song is awesome. That’s how a lot of the music happens; like, I just come downstairs for breakfast and someone’s working on something, and we’re all like, oh this is dope, and we work together for about nine hours and finish a song. And I just came downstairs for some cereal! [laughs]

YH: Where did the inspiration for "#sexsong" come from? Particularly the sound of it and the hashtag portion?

SB: What happened with that, I was making a beat -- I just wanted to start something new and fresh. I thought that the beat was cool, and so I showed it to everyone else. And the beat developed into this song; it sort of came out of nowhere. I would say we finished it in about 2-3 days. We had been working on so much music -- like hundreds and hundreds of songs -- and we just wanted to put it out there. We really loved our music, and we wanted to share it with everyone we knew. We wanted to put the hashtag “sexsong” so that it would trend, and all of the proceeds would go to research for HIV/AIDS. That’s really what Big Bad’s all about. We’re very focused on our music and giving back.

YH: How was it working with Big Bad University as opposed to traditionally working with your uncle, Redfoo (Stefen Kendal Gordy)?

YH: I noticed that you and Big Bad University are currently on a Who Came to Party? tour. Where have you recently played, and where are you headed to next?

SB: Well, we played in South America. We went out there, and we toured in Rio and a bunch of different places. We all DJ’d and played various shows. We all DJ and write our own songs. We were playing really popular songs mixed with our own songs. The vibe was so strong and so great that we booked another show. And this show was a real show, with lights, a set list, and everything. We had some new songs that we wanted to share. It was like the Partridge Family coming out of the house!

YH: The proceeds from "#sexsong" go to Life Beat, which helps fight HIV/AIDS. I would like to congratulate you and Big Bad University on your kind donation, and ask what inspired all of you to donate the proceeds to HIV/AIDS research?

SB: We like to give back. We research a lot of stuff, and I’ve researched a lot about HIV/AIDS. We wanted to give something a little back. We like working with charities; we just want to give back to the world.

YH: Where are you and the Big Bad University crew headed next?

SB: A lot of us in Big Bad University is coming out with new songs, we’re all about to have new releases. Be ready for it!

Keep up with all the latest goings-on with Big Bad University and download music on their Website!