Subway Clocks In with Original Webseries “The 4 To 9ers” 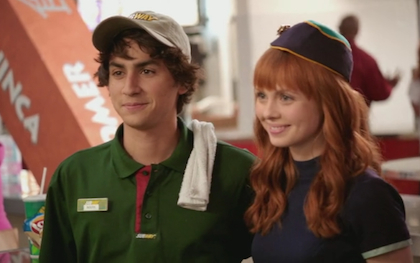 Subway has always been known for offering healthier options when it comes to “fast food” and for being the sandwich chain of choice for athletes and even members of the U.S. military. And they aren’t about to forget all the people that make their everyday operations run smoothly – those good ol’ 4-to-9ers!

In addition to serving up those fresh, tasty subs, Subway has always been a loyal employer of teens and students looking to get their first taste of the working world. I remember many of my pals from high school donning the Subway apron and meticulously crafting the perfect turkey sub for my teenage tum-tum. Now, the chain hopes to pay tribute to all those hard-working part-timers with a new webseries exclusively on Hulu, entitled, appropriately, “The 4 To 9ers”.

The show, which premiered on August 28 as part of a 10-episode-in-all series, follows the after-school hours of rich kid Mark (Ashton Moio) as he dives head-first into a part-time gig as a Subway employee at the local mall to help pay for his own car – a rite of passage many of us are familiar with. He’s taken under the wing of fellow employee/classmate Seth (Moses Jacob Storm), and, on his first day, catches the eye of a comely young lady, Beth (Galadriel Stineman), who works at the cell phone kiosk nearby. Hilarity and condiments fly, all under the watchful gaze of an overzealous mall cop.

For this undertaking, Subway, with the cooperation of brand studio Content & Co., hired proved talent in TV writer/producer/directors Jamie Widdoes and Tim O’Donnell to bring the world of the teenage after-school job to life in a humorous yet relatable way. New episodes are released every Tuesday, which means #3 just came out today – watch it below, and then head to Hulu to catch up with the rest of the series!

Anyone else suddenly in the mood for a $5 Footlong?