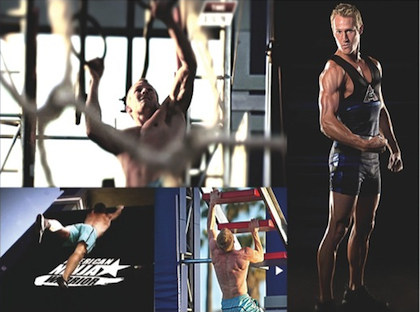 Recently, American Gladiator and "American Ninja Warrior" champion Evan Dollard (AKA Rocket) let me in on a few of his fitness secrets, his work with Quest Nutrition, and what it’s like to be an American Gladiator (apparently, some spandex is better than others!). I was most inspired by Mr. Dollard’s efforts to help raise money for cancer research, and the play he is currently working on about his own family’s struggles with cancer. Read on for tips on how to stay in shape during the holidays, and to learn what it’s like to train to be an American Ninja Warrior!

YH: What are some of your secrets for fighting the holiday bulge?

ED: Half of the battle in the holiday season is knowing that there will be a delicious snack at every turn. Whether it’s the family gathering, or the office party, or even when you go to a coffee shop -- there’s all the different lattes. There is a delicious sugar-heavy snack at every turn. It’s good to know it’s out there, so you can prepare for the battle. [laughs] I’ve found that what you need is some sort of arsenal, which for me is the Quest Nutrition bars. They have these peanut butter cups which are actually high protein candies, so there is only one gram of sugar per serving. They are super healthy and really delicious! I have a huge sweet tooth; I love holiday lattes and ice cream. So, in order to curb those cravings, I reach for the Quest Nutrition peanut butter cups.

YH: Can you tell us a little bit about Quest Nutrition?

ED: I’m part of the Quest Ninja team; we are trying to attract athletes from all over the world. Basically, anyone who is [into] the pursuit of destroying all obstacles is who we want on our team. My association comes from being Southwest Regional Champion for “American Ninja Warrior”, which was an awesome opportunity for me. We are trying to find athletes who are trying to destroy those obstacles out there. We’re currently sponsoring a short film with Ronda Rousey, the first female champion of the UFC. I actually interviewed her at Olympia in Las Vegas a few months ago, and she’s just really great; she really embodies the philosophy of Quest Nutrition. We are trying to build a ninja team and find out who loves our bars.

YH: Congratulations on winning the Southwest region for “American Ninja Warrior”! Can you tell us a little bit about that experience, and how you prepped yourself for it?

ED: The experience is truly unreal, and I got into it by winning “American Gladiators” on Season One on NBC. They rebooted the show about four years ago on NBC, and I was a competitor on Season One, and I won. I ended up doing two seasons of “American Gladiators” and had the time of my life. I had been doing obstacle courses, which helped prepare me for “American Ninja Warrior”. Unfortunately, NBC didn’t renew the show, but I kind of already had a bit of training from it for “American Ninja Warrior”. A lot of of the training for the two was quite similar. I  focused on upper body strength, interval training, and sprints. You have to be explosive, fast, and have that agility to carry you through the course. You have to be able to accomplish anything in two minutes or less using your upper body. And nutrition was a huge part of that. I was an athlete in high school, I ran in college, and I did 5ks, 10ks, and all of that. I figured out that nutrition is a huge part of that. I do my best to minimize the amount of grains and processed sugars I eat. And because nutrition is such an important thing to me, it really made sense for me to join the Quest Ninja team. My personal favorite of the bars are the cinnamon roll bars, because I happen to really like cinnamon rolls. The cinnamon roll bars just help me to feel good!

YH: Could you tell us a little bit about what it is like to be an American Gladiator?

ED: It’s fun! It’s fun to be able to say that I’m the only athlete in the world who can say that I was an American Gladiator Champion and now a regional champion on “American Ninja Warrior”. No one else has done that. It’s so fun to be able to say that, because both experiences were so unique. Being a competitor on “American Gladiators” was a lot more fun than a being gladiator. They both had their perks. The spandex I wore when I was Rocket on "American Gladiators" was much cooler than the red compression shorts I had on for being a competitor. They were titanium grey and they had this red belt. They looked as cool as spandex can look [laughs]. But it was awesome because you show up and, for example, as a competitor, I was not allowed to talk to the other competitors. When I first met Wolf, it was when I was competing against him. He was out there, howling with this unruly facial hair. Then, when he was standing behind me before we were going to climb the rock wall, he was growling in my ear. My initial reaction was that he was certifiably nuts! Obviously I got to know him during Season Two, and now we are really good friends. We’re actually pitching our own reality show together. I think that the highlight of becoming an American Gladiator was to learn that Wolf wasn’t a crazy person. It was an incredibly rad experience. I was just constantly on top of my game physically and mentally.

YH: You have done quite a bit of charity work, particularly involving raising money for cancer research. Can you tell us a little bit about that?

ED: I believe in any opportunity to give back. Especially when you have the opportunity to give back. That’s one of the greatest things about being able to say “Hey, I was on 'American Ninja Warrior' and on 'American Gladiators',” because it gives you that platform to give back. In terms of the cancer research and the Day of Champions benefit, my mom, aunt, and great-aunt all died within a three-year timeframe from cancer. It’s very personal to me. Anytime there is an opportunity to help with cancer, I want to be a part of it. That’s how I got involved with the Day of Champions event. I don’t want people to lose others prematurely. I want there to be the money and resources for cancer research, so that we can hopefully find a cure.

In addition, I wrote a stage play based on my family’s experiences with cancer, and I am working on getting it produced in L.A. The play deals with how the mom has terminal cancer, and how that affects the family dynamic. My mom was such an inspiring person. My mom never complained, and she had five-year remission breast cancer, but she led a 10-year battle with brain cancer. She never complained, and my dad stuck it out -- he was raising three kids and dealing with medical bills, and he was there by her side during the whole thing. It was incredible because I know that not everyone has the opportunity to have such amazing parents, and while it wasn’t an ideal scenario for anybody, we stuck together for as long as we could, and we battled with her. And that’s the story I want to tell. I want to get on stage and hopefully have the ticket proceeds benefiting cancer research. It’s a very important issue for me.

YH: What tips do you have for our readers who are working on getting in shape? Do you have any fun workout tips?

ED: 1.) Stay focused with someone who will keep you accountable for it. That’s truly one of the main benefits of having a personal trainer. They are the accountability, and not to mention that you are investing financially in them. So, if you miss an appointment, and then don’t show up, you’re losing money. I personally align myself with the other ninjas. They continue to inspire me and push me to get stronger. I would say find someone who keeps you inspired.

2.) Nutrition. I would say that 80% of the battle is nutrition, 20% of it is going to be exercise, so you need to get that under control right away. Know that you are going to be having these sweet cravings, which is why I recommend having Quest Bars on hand. I truly say that in all sincerity, because I have eaten protein bars that are loaded with sugar that actually prevent you from losing weight. So, if you actually want to get in shape, you need to know what you are putting in your body. I also recommend following the Quest Ninja team on Facebook and on Twitter, because we have inspirational stories to help keep you motivated.