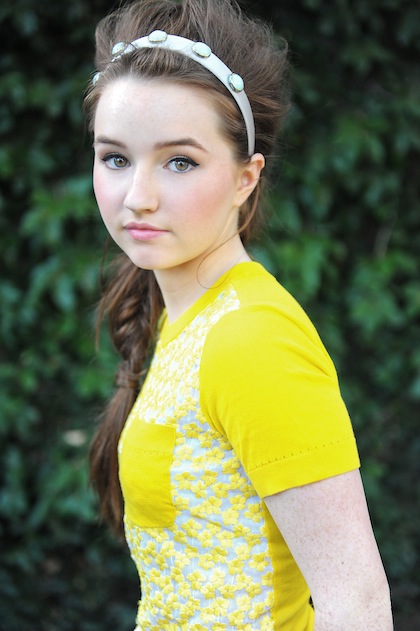 Kaitlyn Dever recently starred in Short Term 12 alongside Brie Larson, where she plays supporting lead Jayden, a troubled teenager living in a group home. Her performance was so breathtaking that she actually won a spot on Indiewire’s 10 Breakouts To Watch at SXSW. She can also be seen in the film The Spectacular Now as Krystal, the know-it-all, rather brash best friend to Shailene Woodley’s character. And if that wasn’t enough, Kaitlyn also just finished shooting Laggies where she plays a hardcore partier alongside Chloe Grace Mortez and Kiera Knightley, as well as her first lead role in Grass Stains, a drama about a teenager trying to deal with his guilt after his role in a prank caused the death of his girlfriend’s older brother.

Kaitlyn isn’t new to acting. Over the years, she has developed a rather interesting resume. She played Megan Mullally’s daughter on the comedy “Party Down” and appeared in the HBO movie Cinema Verite. She currently stars in the ABC comedy “Last Man Standing” as one of Tim Allen’s three daughters.

Kaitlyn is great fun to chat with. She has an infectious laugh and is willing to poke fun of herself (always a great attribute to have)! We talked about what it’s like to play a know-it-all, shooting in North Carolina, and her secret talent:

YH: Tell us a bit about your film Short Term 12.

KD: The film revolves around Brie Larson’s character, Grace. It’s about her working at a foster care facility. I’m a new foster kid there. I’m angry, mad, and my character doesn’t want to be there. Throughout being at the facility, Grace and I share some similarities. I remind Grace of her childhood and it affects her a lot. She was abused by her father, I was abused by her father. It’s a very beautiful film. It sounds dark, but overall, it’s a beautiful film. I’m so happy with the way it turned out.

YH: Did you do any research for the role?

KD: I get this question a lot. Brie Larson and John Gallagher play the foster care workers, and it’s a different thing from being a worker versus being a kid at these facilities. I didn’t get the chance to talk to any kids, which I think was probably a good thing. The main thing for me was thinking about how this character doesn’t have a good life right now. She’s just trying to overcome something internally. I feel like that was the most important thing for me to think about. Before we started shooting, we did meet with a real foster care worker, who told us a lot of amazing stories about the work he’s done. I really soaked in all the stories he told us and brought it to my character. I read the script a lot, so that I knew my character like the back of my hand. At times, I created my own back story for my character. That was the research that I did.

YH: What was it like to work with Brie Larson, who is also in the film The Spectacular Now?

KD: It was just fun. She’s such a fun person to be around. I think that’s really cool to be on set with just fun people. We didn’t work with each other on The Spectacular Now; we met a few times, we didn’t have any scenes together. It was really cool to work together in Short Term 12. All of our scenes were together. We didn’t have any happy scenes together. We had happy moments in the movie, but not really happy scenes. One day, Brie and I were shooting this really intense scene, and Brie just looks over at me and says, “Kaitlyn, we haven’t had anything happy together.” [laughs] I laughed and realized that we hadn’t! It was really cool to do so much with Brie. I really did learn a lot from her. I’m a young actress and so is she, and she’s done a lot of work. She’s very professional. I just had such a good time with her.

YH: In The Spectacular Now, you play a little bit of a know-it-all. Did you relate to your character at all?

KD: Do you think I’m a know-it-all? [laughs] I’m not Krystal. I hope I’m not Krystal. I love playing characters. She’s kind of annoying. She’s overbearing. No one really likes her. Shailene Wooley’s character probably doesn’t even like her, but she feels like she has to be friends with her or something. [laughs] That was my initial thought when I first read the script. I love playing characters that are not me. I don’t think I have anything related to Krystal at all. We’re two completely different people. She’s very smart and goody-goody. The correct word to describe her overall is "annoying"!

YH: Did you read The Spectacular Now prior to starring in the film?

YH: In the near future, you will be in the films Laggies and Grass Stains. Can you tell us a bit about those films?

KD: It was about a month-and-a-half ago when I finished shooting Laggies. That was really cool. This was the best summer of my life. I had such a great time with the people I got to work with and meet. I had a really great time which made me love what I do. When I was shooting Laggies, it was really fun. It was a character I haven’t really played before. She’s a partier and she drinks a lot. Some days, I would have blue hair with crazy twisty things, or green hair, or purple hair. She wore nothing that matched. She’s a really cool character who loves to live in the moment. I played best friends with Chloe’s character. It was really cool getting to work with Kiera Knightley too. Her character, Megan, is 28, and she’s trying to figure out what she wants to do with her life. She’s kind of freaking out a bit because all of her friends are getting married and have jobs, and she’s a young-at-heart kind of girl. It was just so much fun. I’m very excited about it! We shot in Seattle, which is such a great city. I met Soundgarden when I got off the plane going to Seattle. I was like, “Oh my God, that’s them!” I was freaking out. The music side of Seattle is really cool. I felt really cool because I carried my guitar on the plane.

Grass Stains was shot in North Carolina. That was a great time. It was my first lead in a film. It was all awesome. It’s a very special movie. It’s centered around me and Tye Sheridan’s character, Conrad. I play Grace. He’s discovering his first love at the beginning of the movie and it stinks. He gets involved with this prank with his best friends that ends up involving my brother’s death; he has something to do with my brother’s death. I just think that my brother died, and I had no idea how he really died. The whole movie is about Conrad dealing with the awful guilt of not telling me, and me trying to forget about my brother and trying to focus on my relationship with him. I force myself into something that I’m not really ready for. It’s a really beautiful film. It was very hot in North Carolina. There was a lot of sweating. And Chick-fil-A. I had so much Chick-fil-A! [laughs] Working with [director] Lynn Shelton on Laggies was really cool. All my friends were calling me up and saying, “You’re working with Lynn Shelton! That’s awesome. She’s so cool. I love all of her films.” She normally does improv films, and I didn’t know that until my friends assumed my movie was improv. I did notice that Lynn was really cool about the improving, and I got to improv. I had a really great summer.

YH: You also play guitar. Any interest in becoming a full-on musician as well?

KD: I do. I’ve been playing guitar since I was in the second grade. I really love it. When I was little, I didn’t want to do a lot of things. My parents would put me in a lot of things, like gymnastics. I really wanted to go to acting classes. I started playing guitar before I got into acting classes. That is something that’s stuck with me. I love music. Music is a beautiful thing that’s been a part of my life for a really long time. I recorded some covers with my sister, who plays piano, and she has a really beautiful voice. She can harmonize to my voice at any given moment. It’s really cool. My guitar teacher says it’s because we’re sisters, and there’s a connection there. He was being totally serious. We did a cover of “Landslide” by Fleetwood Mac and “Ring of Fire” by Johnny Cash. We’re going to release it on YouTube soon. I’d like to start a band with my sister. Acting will always be my main thing. But like Johnny Depp, he’s an awesome actor who goes and plays with The Black Keys. He’s an awesome guitar player. You can tell that he does music on the side. I want to do both. That’s what I would like to do.

YH: You are one busy girl! What do you like to do when you have a little bit of free time?

KD: I love writing and hanging out with my sister, playing guitar while she plays piano. I love spending time with my two sisters. I feel like family is the most important of all. I wouldn’t be doing anything without my family and their support. Family will always be number one. I love spending time with them. And just being 16 and enjoying it. I love hanging out with friends, going shopping, going to the movies. I love getting a big group of my friends together and hanging out.

Be sure to follow Kaitlyn on Twitter! And check out our visit with Kaitlyn on the set of "Last Man Standing" below!