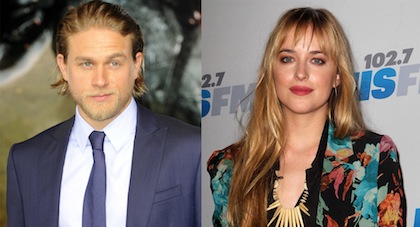 But both were outta luck. Helming duties were bestowed upon lady director Sam Taylor-Johnson (wife of Aaron), and now, after an extensive search, the powers-that-be have finally settled on their two leads!

For you motorcycle enthusiasts out there, the latter name should be plenty familiar. Hunnam is best known for his role as Jax on FX’s “Sons of Anarchy”. Now, I have not read the book, but even I am having trouble picturing the rugged, stocky Hunnam as the suave and sexy Mr. Grey. Yes, Charlie cleaned up a bit recently for this summer’s Pacific Rim, but he still comes off more Viking than businessman. We shall see.

As for Ms. Johnson, she has a long film legacy already behind her. She is the daughter of movie stars Melanie Griffith and Don Johnson, and her dear mother is certainly no stranger to spicy, seductive roles, so she ought to have some guidance here in what is sure to be a breakout, star-making role. Again, I have not read the book, but from I understand, Anastasia starts out as an innocent college co-ed quickly corrupted by Christian’s, ahem, “charms”, and I think Dakota is a wise choice – not just physically either. Her profile is not too high that there will be any major expectations of repercussions for taking on this role, but she’s not exactly a nobody either.

Early feedback seems pretty cool to these casting choices, but like always, we will have to see the finished product in order to make a firm, educated judgment. But at the end of the day, does it really matter? We just wanna see the dirty bits anyway.

Fifty Shades of Grey the Movie Extravaganza is scheduled to be released on August 1, 2014.