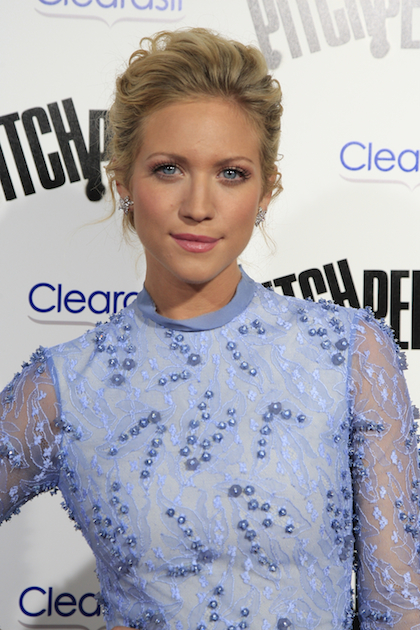 Brittany Snow is one of the stars of the ensemble comedy, Pitch Perfect, available on DVD starting today (December 18). Pitch Perfect follows Becca (Anna Kendrick) as she leads a plucky all-girl college a cappella group into nifty mash-ups as they battle their way to the top of college music competitions. Ms. Snow plays one of the saner ladies in the ensemble, and simply had a blast working with the different actors that the Pitch Perfect cast includes. The DVD is full of extra features, including deleted and extended scenes, a music video, and a behind-the-scenes look at the film that Brittany was more than happy to tell me about.

In addition to starring in Pitch Perfect, Snow is also the founder of the website and movement Love is Louder. This initiative was started by her, the Jed Foundation, and MTV to support anyone feeling mistreated, misunderstood, or alone. Since the campaign was founded in 2010, thousands of people have come together to spread the message that love is louder than the internal/external voices that bring us down.

Ms. Snow may be one of the most positive, upbeat people I have ever spoken to. Even though she was battling a rather nasty cold when we chatted, she was still extremely happy and perky. We dished on her new role in “Ben and Kate”, starting Love is Louder, and her time as a guest judge on “RuPaul’s Drag U”!

YH: Can you tell us a little bit about the extra features on the Pitch PerfectDVD?

BS: One of the biggest ones is a behind-the-scenes of the boot camp we did prior to filming Pitch Perfect. It was a rehearsal and training camp we did. The other big feature is a behind-the-scenes of when we actually started shooting the film, and what the experience of shooting was like. We talk a lot about the film, what we thought of it, what filming was like, why we signed on to it, etc. So, it’s sort of a before shooting and during behind-the-scenes look at the film. I also think that there are a few outtakes. I am not entirely sure, but I certainly hope that there are! That would be amazing. Rebel Wilson had hundreds of outtakes that were not used but are really hilarious.

YH: Could you tell us a little bit more about the boot camp you and the other stars in Pitch Perfect attended prior to filming?

BS: It was really great. I really think that the boot camp is what made us grow so close to one another. It was sort of like preparing for a Broadway show. We had to run through so many rehearsals prior to filming, so we really got to know one another, which was really cool. We didn’t actually know each other at first... We spent 10 hours singing and dancing per day, so we really did a lot of training. It was also a lot of work, and it gave us a chance to prepare for what was ahead.

YH: Was there a song that you really enjoyed performing?

BS: “No Diggity” was my favorite to perform, because that has been my go-to karaoke song my whole life. I actually knew all of the words to it, and I taught Anna Kendrick the rap part at one point. I was a little jealous that she got to do the rap part [laughs]. I also really like the Bruno Mars/Nelly mash-up. It was the part that we really all came together as sisters and as characters, and it was just a really sweet moment that turned out really great.

YH: Can you tell us a little bit about Love is Louder? What inspired you to start it?

BS: I started Love is Louder about two years ago with the Jed foundation. I’ve been involved with mental health organizations for quite some time. I was really hurt and shocked by the recent suicides that keep happening because of bullying, and the hurtful ways that we speak to one another. I wanted to do something to help. So, I contacted my friend Courtney Knowles, who works with the Jed foundation, and asked him if he could help me. So, we created this movement based on my experience, and my friends’ experiences, and it launched into this really great movement that is now Love is Louder. I’m really honored by the movement, and I am so touched that people like it as much as they are.

We really wanted to do something that was like a campaign; Love is Louder is about looking on the positive side and being proactive for spreading the love. It’s not so much about discussing what is wrong but discussing what’s really good in life, like the love we have for one another. We really launched it with the idea that it’s not just about bullying; it’s really about mental health and self-esteem, and the things that can bring us down. We want to focus on the positive things, which will help people get through the rough times.

YH: How can we help get involved with Love is Louder?

BS: In the New Year, we will begin to set up a bunch of Love is Louder clubs to be set up in schools. Whichever school wants to do it can start a Love is Louder club, where they can have meetings with daily reinforcements of support and how to be positive, with fundraisers to help those in need... there are a bunch of activities the clubs can do. There is a link on our website that will help the clubs, with tips and activities that can be brought into the schools. We want each club to be its own unique individual club; it is up to them to ensure how Love is Louder can have a positive influence on their members’ lives.

We don’t really focus on just one group, which I think is really important. It’s not just for LGBT, or for young people, Love is Louder is for everyone. We believe that everyone should be brought under an umbrella, no matter what. We don’t really focus on one approach or another; we just want to help people love themselves. We also have a blog on the website which anyone can submit to, and we are trying to encourage more people to submit pieces to it. We would love more submissions. I read all of the submissions, as does my partner Courtney. We want the blog to be an open discussion where people can really help one another.

YH: You are currently on the sitcom “Ben and Kate”. Can you tell us about your character on the show?

BS: My first episode aired Tuesday, December 4. My character is a love interest for the character Tommy [Echo Kellum]. We immediately have a connection and start to become very serious fast and furiously, and then Kate [Dakota Johnson] gets involved in our relationship (for the worst). I take a turn from the sweetest girl in the world to maybe-not-so-sweet. I am on about four or five episodes. It’s a really fun character to play and a really fun show to be a part of. The show is really funny, all of the actors are amazing; it’s just been really great.

YH: I also interviewed Hana Mae Lee, who played Lilly in the film, and we had a great conversation about “RuPaul’s Drag Race”. I wanted to ask if you too are a fan of “RuPaul’s.”

BS: I actually got to be in an episode of “RuPaul’s Drag U”! I got to meet RuPaul and all of the ladies, and I got to judge them on all of their transformations, which was really cool. RuPaul is the coolest person in the whole world. It was so much fun!

YH: What are you currently working on that we can look forward to seeing in the future?

BS: I just wrapped up this project called Five More for Lifetime. They did it last year, and Jennifer Aniston produced, and it was about breast cancer. This year, they are doing the same thing but the films are about mental health. There are five different stories about mental health that are all interwoven and by different celebrity directors. Some of the directors were Bryce Dallas Howard and Ashley Judd. In each story, I play a girl with schizophrenia. It was really intense, but it was one of the most rewarding experiences as an actor that I have ever done. I can’t wait for that to come out. It was really important for me to be a part of, as well as an honor. I believe that Five More will come out sometime in the spring, and Love is Louder will be one of the partners in conjunction with the films. It’ll be good.