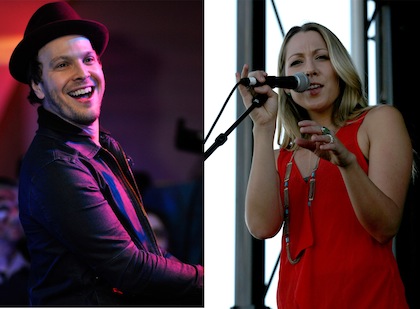 Why should we have to wait untill February 14 to feel the love of another Nicholas Sparks romance that makes every single girl swoon? Valentine's Day, how perfect is that -- This coming Valentine's Day, I will definitely be at the movie theater watching Safe Haven. It’ll probably be a single girls outing... if you couldn’t tell, I am kind of an extreme pre-planner.

Anyways, for everyone whose heart needs a little mending, Gavin DeGraw and Colbie Callait have teamed up to write “We Both Know”, which is now available on iTunes. This beautiful duet was recorded for the upcoming film Safe Haven starring Josh Duhamel and Julianne Hough.

“It’s about a relationship and having to take space from each other, but learning about yourself and the relationship,” Colbie says.

Currently on tour together, the two friends could not help but compliment each other's unique sound and talents. “Colbie is a really gifted human being,” Gavin gushes, “And she’s a beautiful person, so our voices happen to blend really well together. We make really nice music.”

Rumor says the song will be played on the radio in the next few weeks, and a video that was filmed in Nashville will soon follow.

This is Colbie's second time writing a song for a movie; she also wrote for Letters to Juliet in 2010. Colbie explains her approach to writing for films: “You have to tap into what the movie’s about. Usually they tell you where the song is in the movie and what they want you to write about, so you just kind of tap into that direction.”

My favorite lyrics are in the opening line to the song: "They all say it, all the ones that made it / Want to find the one you claim it, but you're going to have to fight."