Q&A: 'A Girl Like Her' Stars Hunter King & Lexi Ainsworth 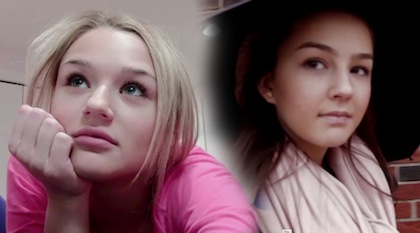 As a teacher, the well-being of my students is near and dear to me. I consider my students to be quite passionate, intelligent, and kind, and I hate to imagine that any of them have been bullied (or worse, are bullies). Since the school where I teach is small, bullying is not a major issue, as we are able to work with students one-on-one more easily. However, I would not be surprised if, at some point in their lives, my students had experienced bullying. I certainly did, and to wake up in fear of going to a place where you are supposed to learn and grow, but instead are terrorized on a daily basis, is nothing short of horrifying. Bullying certainly left a scar on me, but in some cases, it leaves more than that...

Filmmaker Amy S. Weber explores the issue of bullying in her harrowing film, A Girl Like Her. The film, which is fictional but shot documentary-style, follows Jessica Burns (Lexi Ainsworth), a sweet 16-year-old girl who has not told anyone she is being bullied except for her best friend, Brian (Jimmy Bennett). Over the past year, she has been terrorized by the school’s most popular girl, Avery Keller (Hunter King). To try to ease the problem, Brian gives her a hidden camera to document Avery’s attacks. However, the pain becomes too much for Jessica to handle, and she takes drastic measures to end it. As all this is going on, a documentary crew comes to chronicle their high school -- deemed one of the best in the nation -- and finds that there is not only a story in Jessica, but in her bully as well. The crew reveals that, oftentimes, the bully is just as much of a victim.

I found A Girl Like Her to be quite interesting, especially because most of the cast were not professional actors but everyday students and teachers. I was also impressed by Hunter King’s performance as Avery. She makes Avery relatable and even likable at times, which is quite remarkable considering the fact that Avery could easily be a disgusting caricature. The film sheds a new light on the bullying epidemic, one that reminds us that, in order for us to end bullying, we need to ensure that all parties get the help that they need.

In addition to watching the film, I had the chance to chat with Hunter King and Lexi Ainsworth, the two leading ladies of A Girl Like Her. They both had quite a few interesting things to say about their characters...

YH: Tell us a bit about Avery in A Girl Like Her.

HK: What people see Avery Keller as is, the popular girl in high school. She has her clique that she hangs out with and gives the audience a closer look at the so-called "girl world". But there is a lot more to Avery than what people think. You may have to peel back some layers but she's more complex than people assume.

YH: This is a particularly dark role. What drew you to the role of Avery?

HK: This role was an extremely challenging role. Most of the film was improvised, like all the bullying encounters between Avery and Jessica. My director and I would sit and have meetings before each scene and go over what she wanted to see happen, and we went from there. I also really wanted to be a part of something so huge and powerful, and I'm so grateful to be included in this amazing project.

YH: What did you feel was the biggest challenge for this role?

HK: The hardest part about this role, besides the improving, was the physical bullying my character had to do. Physically bullying the character of Jessica was so difficult and emotionally challenging for me.

YH: Have you yourself had any personal experiences with bullying?

HK: I was bullied a bit in high school myself. High school is already a tough time for kids, finding out who they are, and discovering themselves; the last thing anyone needs is to be put down for who you are. It was hard, but eventually you get through it and wind up stronger and on top.

YH: You seem like such a sweet person! How did you get into the headspace to play Avery?

HK: Aw! Thank you!! Getting into the headspace of Avery was really difficult, but I talked a lot with the director about what she would want the audience to feel during specific scenes. Even though in the scenes I acted as Avery, at the end of each day, I was emotionally drained from how exhausting the scenes were for me. 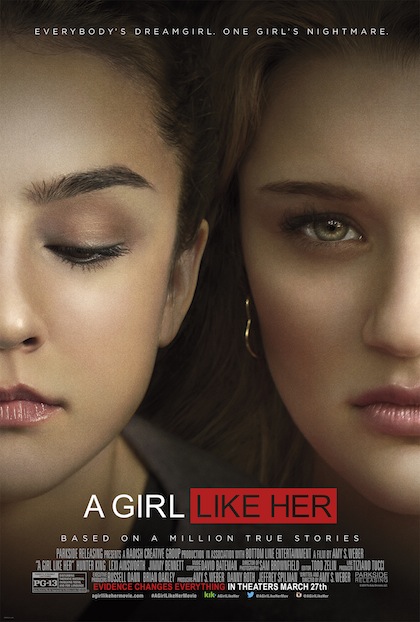 YH: Tell us a bit about Jessica in A Girl Like Her.

LA: She's a sweet 16-year-old. She has a kind heart and keeps more to herself, but she has one best friend, Brian. They are inseparable.

YH: Your character spends quite a bit of the film in a coma. Did you find these scenes to be challenging?

LA: The interesting fact about that is that, my first day on "General Hospital", I had about 20 pages of dialogue, and the actor playing my brother had also just started, but he was in a coma for several weeks and I was kind of jealous he got to ease his way into a new working environment that way. Now I see it's not quite as easy as it looks, haha.

YH: Did you do any research on bullying and modern high schools prior to playing Jessica?

LA: Yes I did. I have found YouTube to be a great source for real-life documentation. I was so moved by the videos people posted about their experience with bullying that our director, Amy, didn't believe me when she asked if I had any personal experience with being bullied. Their stories are so powerful and deeply upsetting to me, I can't fathom anyone watching them and remain unaffected.

YH: Jessica has a distinct look that is quite different from Avery. Did you have any say in Jessica's wardrobe/make-up?

LA: Not particularly. I trusted them, and they definitely delivered the physical appearance I had in mind for Jessica.

YH: What advice would you give to anyone out there who is being bullied?

LA: To tell someone in authority who can help and not to keep silent. There is strength in numbers, and however alone they feel, they are not alone.

Check out the trailer below and be sure to catch A Girl Like Her in theaters starting today (March 27).