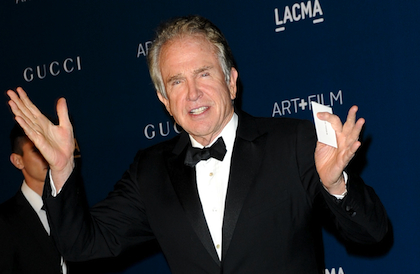 In 1976, sometime before or after starring in Bonnie & Clyde, Warren Beatty became involved in a mysterious project centered around the incredibly reclusive Howard Hughes. For those of you unfamiliar, Warren Beatty was a force to be reckoned with during his day. He was a leading man who starred in unconventional films that became classics, while stealing the hearts of countless Hollywood beauties in whatever spare time that he had. But after directing 1998’s Bulworth (a brilliant film if you have not seen it) and starring in 2001’s Town and Country, Mr. Beatty slowly backed away from the Hollywood spotlight and is now almost never heard from. Well, it’s been reported that Mr. Beatty might be launching a pretty little comeback, as that Howard Hughes project that he has been fiddling with on and off for the last 40 years is nearing completion.

I’m not going to bother comparing what Mr. Beatty is doing to the much beloved Boyhood that famously took 12 years to make. No, I’ll let you and the rest of the internet do that for me. Seriously, though, Richard Linklater’s film was a planned experiment to see how the natural aging process would affect an audience's empathetic connection with the main characters. Warren Beatty... well, he’s just been kind of working on it for a while. At least that is as much as anybody can really tell. The principle photography on the flick wrapped about 9 months ago, but who’s to say some footage wasn’t shot back in the '70s when Mr. Beatty was even more of a baby face than he is now at the age of 77? Well, regardless of how long it took him to make the damn thing, I think this project could be a very interesting one indeed, as it features the return of a Hollywood giant who has shown audiences that he has a decent handle on the whole storytelling thing. The film also features a fairly impressive cast, consisting of the likes of Matthew Broderick, Taissa Farmiga, Lily Collins, Annette Bening, Martin Sheen, Oliver Platt, Dabney Coleman, and Kevin Smith as Silent Bob. Okay, just kidding about the last one.

Again, we know very little about the film, but the few details that have made its way to the public reveal that it will be a love story in which a young lady goes to Hollywood and becomes the lover of the enigmatic Mr. Hughes. While not exactly the most original sounding story ever, I actually have faith that a talent like Warren Beatty can elevate it to a greater height than just another generic love story that cheats by shrouding itself in a vail of nostalgia that serves to operate as a natural romantic booster. Do yourself a favor and check out the works of Mr. Beatty if you remain unconvinced, then treat yourself to another viewing of The Aviator if you also need to be reminded of Howard Hughes’s worth as either an historical figure or, at the very least, the lynchpin of a Hollywood Legend’s return to form.