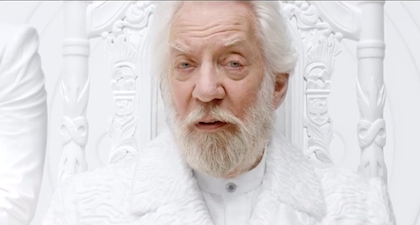 We are ever so steadily creeping closer and closer to the release of The Hunger Games: Mockingjay – Part 1, and the time has come for the first teaser trailer to roll out!

In the same spirit of the franchise’s marketing campaign of faux propaganda, this teaser follows suit – not so much a trailer for the film as it is a “message” from Panem’s President Snow, gently but firmly urging the citizens of this broken country to stick together... OR ELSE. Snow himself (played by Donald Sutherland) sits in some sort of white-washed throne room as he makes his speech, and at the end, we see he is accompanied by none other than –

GASP! – 74th Hunger Games co-champion Peeta Malark! BUT WHY???? (<-- the question that those who haven’t read the books, like me, are surely asking)

Yeah, so I haven’t read the books, but I do know my history, and I noticed that this address is a cheeky reference to an infamous speech made my mega-racist politician George Wallace back in 1963, in which he yelled from the pulpit “Segregation now, segregation tomorrow, segregation forever!” In this clip, Snow replaces “segregation” with “Panem”, but in all honesty Panem might as well be a byword for segregation – the country’s very existence relies on the segregation of the classes, and Snow, more than anyone, wants/needs to make sure that everyone in Panem knows their place. Jerk.