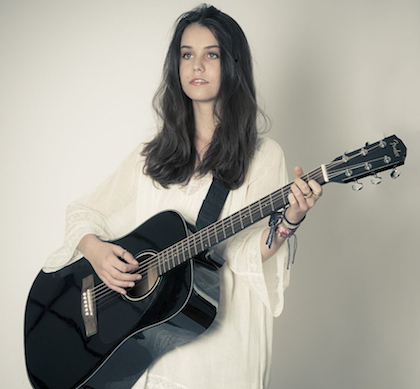 Indie folk musician Juliette Jules is a 16-year-old from France who just released her first EP entitled “Black Crow”. The singer writes all of own her own lyrics, and played the piano, guitar, and synth on the record. Besides just being a well-rounded musician, she also sounds mature for her age and is well on her way to shaping out a unique sound for herself.

Juliette first starting playing music when she began taking classic piano lessons as an 8-year-old, and then when she was 13, she bought her first guitar with the money she received from selling one of her paintings (oh yeah, she paints too). She was driven by the urge to focus on a creative outlet and she quickly adapted to the life of making music. A music producer named Peter Carroll heard her singing in a park in Paris, and they ended up working together on her first EP. On hearing her sing, he said:

"I was in a conversation with my wife and neighbors while dozens of children played on a playground; from behind us we heard a voice. It was as if the park was instantly converted to a grand concert hall. The park became quiet, and we all turned, and there was Juliette Jules, her back to us, playing the acoustic, and singing in the purest voice imaginable. She was singing songs to a friend who sat facing her, smiling. Juliette would end each song, and they would laugh and talk. It was an incredible moment to experience."

Juliette writes all of her own lyrics, coming from the perspective of trying to really say something personal and meaningful through her music as opposed to hopping on board the mainstream pop train. She cites her musical inspirations from people like Leonard Cohen, Patti Smith, and the Sex Pistols, and her songs explore deep topics like loss, love, and the importance of family and friends. Her voice is already pretty developed, clear and untarnished, and the depth of her songwriting shows a seriousness that will drive her where she needs to go.