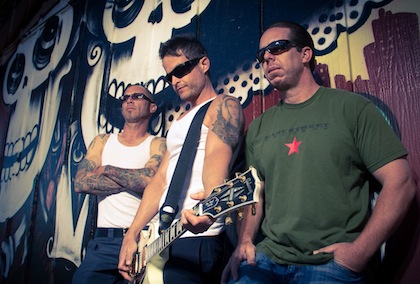 The alternative punk Arizona trio Lovesick Saintsrecently released a new music video for the song “War Story”, which they describe as a "a heart-felt punk rock tribute to all those who fought and sacrificed their lives for our freedom."

The current formation of the group was not always as it has been, with changing members and a vastly evolving sound but never breaking in the actual music making. These days, the three members of the group include Tom Holliday on guitars and vocals,Jarrod Olson on bass, and Christian Howell on drums and backing vocals.

When Lovesick Saints originally formed, it was made up of Holliday plus his brother Davy Joe and Sun Yun. At that point, they were working with a traditional country sound mixed with punk sensibilities, but the group parted ways over some of the members moving on to different career paths. Today, the new incarnation of the group has transitioned their sound into a little more of the alternative-punk-rock vibe. Olson coming aboard with a specifically grunge-type bass technique really helped to shape the sound to where it is today.

The song “War Story” is traditionally punk-rock and upbeat despite the song’s somewhat serious content about soldiers away at war. The video directly corresponds to the song’s aesthetic with the band’s high-energy performance set against the stoic backdrop of a soldier’s grave marker.

“One Foot in the Grave” is a song about money (or lack there of) and the greed that can follow it around. Their focus tends to be of the more serious variety, touching on those previously mentioned topics as well as things like poverty and depression. Instead of forming the concept into a moody melodic one, much of their music is still of the jump-around variety in the same vein as Green Day.

So far, the band has released four different studio EPs, which are titled: "The Punk Rock Honky Tonk", "Resurwreckshun", "Outside Looking In", and their most recent "Dia de los Muertos". They perform within the Arizona area with plans to expand.

Keep up with the band hear more music on Soundcloud, Twitter, and Bandcamp.