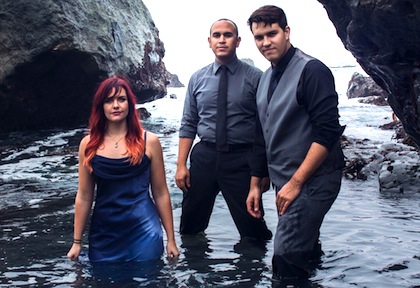 It’s not that easy to do rock music in totally new ways, but Monterey, California, based band Direct Divide has carved out their own niche in what they refer to as “violin intensified rock”. It's pretty self explanatory in concept, but hearing it is a pretty unique experience.

Direct Divide is made up of members Razz (strings and vocals),Kevin Proctor (guitar, synth, and keyboards), andValdemar Huguet (drums). They originally formed in Seattle, and after a year of touring in 2014 decided to settle in Monterey for a while to write their next album.

The group recently released that EP, entitled Own Your Ocean, which encapsulates their orchestrated alternative rock style. What’s interesting about their style is that, while the energy and emotions runs high amongst the drums, electric violins, bass, and piano, their lyrics are also totally relatable, so it’s listenable as an everyday album and not saved exclusively for the more cinematic moments.

Watching their video for the song “1000 Years” gives some insight into what it must be like to watch them live -- intense in a really gorgeous way. Part of the video showcases them playing the song live in true rock fashion. The song opens light in instrumentals and strong in dynamic vocals. It instantly feels like a story is being told, which is naturally helped along by the snippets in the video that are character-driven.

The song “Kick It” is maybe the best at showcasing an opening by electric guitar, a sound that gives the song a vibe that it might be both brand new and 300 years old all at once.