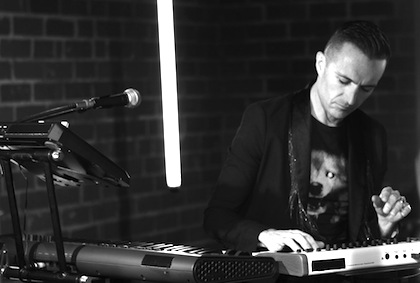 According to creator Gareth Thomas, [debut] is "more than a band. It's a music and art collective with an ever-changing cast." While [debut] originally started as a solo project, after two albums, Thomas decided to relaunch it to make it more of a collaborative effort in both the musical style and mediums used alongside it.

Initially, [debut] was mostly instrumental and electronic, but with the relaunch came opportunities like performing live band shows and expanding to different kinds of art and film projects.

That the group is an interesting collaborative effort is putting it mildly. Their first single in 2013, called “Starting to Love”, featured Depeche Mode drummer Christian Eigner. The second single, “Sweet Little Girl”, had an accompanying music video that was directed by indie filmmaker Danny Drysdale.

After some successful single drops, the first full length album, Post Cards From Berlin, has seen its release. The album was actually fan-funded through Kickstarter and was recorded in both Los Angeles and Berlin.

The album sound is alternative rock with a turn towards the dark and intense. Thomas provides most of the vocals on the track, with appearances from Cyd Claire, Angela Bartys, and Sammi Doll.

The music clearly touches on some moments of turmoil but feels intimate so it draws you into the experience. The lead single, “More Than This”, opens with soft vocals and piano before opening into an electronic beat that adds a real theatrical feel to the song.

“Not the One” has a grittier dark alley feel, while “Come Around” differs by opening with female vocals and heavier, sexier, instrumentals; at one point, the singer repeats “I don’t feel anything” over and over, but you certainly will.

And that’s just for starters; the album is truly full of unexpected styles and vibes while sounding cohesive, like a soundtrack into Thomas’s mind.