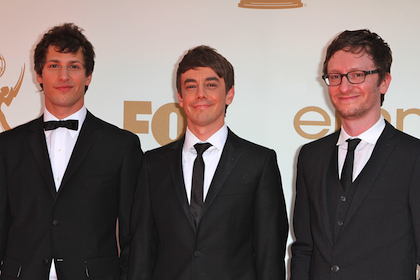 Here’s some happy news for fans of The Lonely Island: they’re making a movie!

No, it will not be connected to their first film, Hot Rod, which had nothing to do with their band. Instead, this new film, entitled Conner4Real, will be an homage to the most popular type of documentary -- the boy band reunion. Produced by Judd Apatow, the film follows Andy Samberg as a rapper named Conner, who, after his last album bombs, is forced to go on a reunion tour with his old boy band, none of which he is too pleased about.

Set to be shot as a mockumentary, the film will parody recent boy band documentaries such as One Direction: This is Us and Justin Bieber’s Never Say Never. There have been rumors that Samberg’s long-time collaborator and buddy, Justin Timberlake, will pop up in the film, which makes me hope there will be an *NSYNC reunion in the film (imagine how amazing that would be).

While it’s not yet confirmed that Timberlake will appear, it has been confirmed that Sarah Silverman will. She will star as Samberg’s disgruntled publicist, who has to suffer many indignities throughout the film (I am not entirely sure what that means, but I’m excited to find out!). "SNL" alum Tim Meadows will also star as the band’s overly eager manager, and Imogen Potts will also make an appearance, but her role has yet to be revealed.

Production on Conner4Real began in Los Angeles this week. Are you excited to see The Lonely Island’s first official film as a band?

In the meantime, check out one of our all-time favorite offerings from the boys of The Lonely Island below (NSFW)!