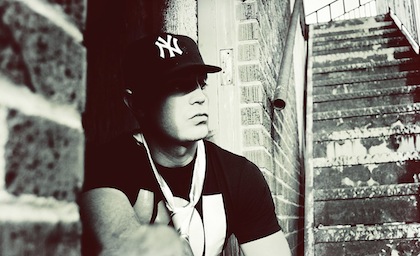 We usually can only handle feel-good music without much depth in small doses lest our commute to work turn into a cry-fest. New York-based artist Chuckie Campbell has found a way to blend the two, so if you have been missing the thought-provoking aspect in the hip-hop scene, he’s your guy, and More Die of Heartbreak is your album.

His vocals are smooth and endless; you might suspect that he is a poet when you listen to his crisp lyrics roll on, and, in fact, he is. As well as writing his music, poems, and short stories, Campbell also founded and edits Sunsets and Silencers, which is an online and print journal for the arts. Campbell writes all of his own song lyrics, and the music’s content is relevant and often intense but feels almost fantastical, set against piano riffs and theatrical instrument use. Keep up with his pace and you will hear some interesting word play and personal thoughts.

To record the album (which went down in Nashville), Campbell recruited Wu Tang members Cappadonna and Solomon Childs, as well as Cole Jonique, Block McCloud, and rock/country group The Breedings for guest spots on the album. The lead single “Synesthesia” opens with a piano that paves the way with a deep, mellow vibe but really becomes the road for Chuckie’s voice to take over. The song “All I Meant” ft. Cole Jonique is a faster paced song that slows for the choruses, and might make you want to dance around and cry all within the same 3 minutes and 43 seconds.

Proving that inspiration can come from all places, Campbell’s album is the creative result of the emotional experiences he went through for years after a violent physical assault. He was aware of how the event marked a change in his interaction with other people, but instead of letting the pain take over, he channelled it into his work. Campbell is a clear talent who is on his way up.