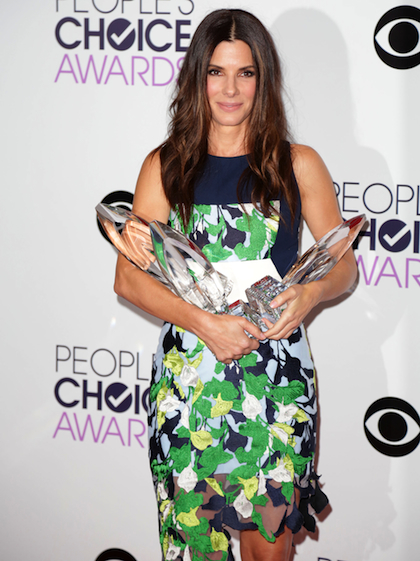 And the People have spoken! Is that too cliché? Well, in case you missed it, the People’s Choice Awards aired last night from the Nokia Theatre at L.A. Live in Los Angeles. This year was a special year for the Awards, not only for several milestone achievements but because it was the 40th anniversary of the awards! For 40 years, We the People have gotten to make a difference in the lives of celebrities. Pretty cool, right?

After last night, the name on everyone’s lips is Sandra Bullock. The versatile beauty personally went home with four big ones to add to her collection -- four big awards, that is. She picked up hardware for Favorite Movie Actress, Favorite Dramatic Movie Actress, and Favorite Comedic Movie Actress. On top of that, Bullock and her heartthrob co-star George Clooney won the People’s Choice for Favorite Movie Duo! These two hotties seem to make some magic, if you know what I mean… Get your minds out of the gutter, I meantmovie magic, obviously! Not only did Bullock win these four awards, but her 2013 movies The Heat andGravity won awards of their own! Bullock has always been a standout, and this year the people really wanted to prove it. They should have called the awards the Sandra Bullock Clean Sweep Awards, because that’s exactly what happened.

Though she was a prominent name the entire show, Bullock was not the only star who stood out to us. The super-talented and always charmingJustin Timberlake won three awards: Favorite Male Artist, Favorite R&B Artist, and Favorite Album for The 20/20 Experience. Since bringing sexyback in 2006, he clearly brought it back for good. And we couldn’t be happier about it!

Another artist who brought it back, stronger and better than ever, wasDemi Lovato! The 21-year-old former Disney star with the incredible voice was nominated in four music categories, and for two of them, the People choose Demi above the rest! She won Favorite Female Artist and Favorite Music Fan Following over stars such as Britney Spears and her BFF Selena Gomez. Those Lovatics are some loyal fans, and we are TOTALLY one of them!

Our girlKaty Perry was in a similar boat last night. We are "Unconditionally" in love with Katy and everything that she brings to the table, and after the awards last night, we know that we are definitely not alone! This totally Prismatic artist was nominated in five categories and picked up awards for two of them: Favorite Song and Favorite Music Video, both for her top-selling hit “Roar”! This feel-good, pump-up jam always brightens up our day and definitely brightened up Katy’s last night.

Last on our People’s Choice highlights, we find the forever lovable and hilarious Ellen DeGeneres. She won the People’s Choice for Favorite Daytime TV Host, and she deserved it because, well… she is the best! Now, let's count them up. That makes, 1, 2, 3… 14 TIMES IN A ROW that DeGeneres has won at these awards! She clearly captures our hearts each time she dances her way in front of the camera, and no doubt she will continue to do so in 2014 with style and rhythm!

On deck, the Golden Globes Awards will be airing this Sunday, January 12. Do you think our film and TV winners for People’s Choice Awards will have to clear off more room on their awards shelves? We will just have to wait and see, but until then… GO BULLOCK!