Our Favorite Moments from the 2020 BET Awards! 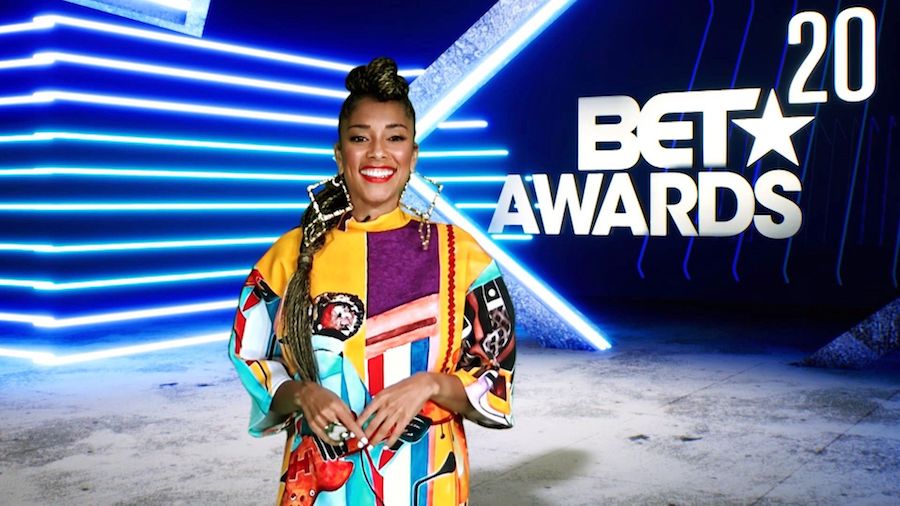 Fans tuned in to watch the first ever virtual BET Awards last night (June 28), and it was a star-studded event accessible to everyone right at home. It was an action-packed night with amazing performances from talented artists and cameos from A-list celebrities we all know and love. Viewers were probably nervous about the 20th anniversary of a highly-anticipated award show being held virtually, but our beautiful and charismatic host Amanda Seales made it a fun, emotional, and entertaining night.

Didn’t get to watch the show? Don’t worry, we’ve selected 10 highlights from the show that we can’t stop thinking about.

Everyone was expecting an emotional tribute to late basketball legendKobe Bryant, who tragically died in a helicopter crash with his young daughter Gianna and seven others earlier this year. But did anyone expect to cry this much? We weren’t prepared at all. Kobe was the best of the best, “the greatest on the court”, as Lil Wayne reminds us. He switched up the lyrics to his 2009 song “Kobe Bryant” to honor Gianna, who was a talented basketball player in her own right, by saying, “Two fingers for the mambacita” while showing a heartwarming photo of Kobe and Gianna. While Lil Wayne rapped “I call him King Bryant, now let the crown show,” the screen behind him played Kobe’s best moments on the L.A. Lakers court, and the inspirational melody in the song tugged at our heartstrings as we’re truly reminded that Kobe was the G.O.A.T. The rapper finished with, “Heart goes out to Vanessa[Kobe’s wife] and the whole Black Mamba Family” and showed an endearing video of Kobe saying, “Mamba out.” The tribute was beautiful and heartfelt, so yeah, we cried many times.

2. Humanitarian of the Year Honoree, Beyoncé

Michelle Obama presented the Humanitarian Award toBeyoncé and started off by saying, "I am here today to talk about the queen. You know the one!" Yes, Michelle, we do! Honestly, we could spend all day talking about how incredible Beyoncé is, from the vocals, to her elite fashion sense, to her crazy on-stage energy. But what often goes unnoticed is her dedication to giving back to the community. Beyoncé has done so much charitable work over the years, such as being an activist for Black rights, helping victims of Hurricane Katrina through the Survivor Foundation, starting Chime for Change to help women and girls, helping provide Black and Brown communities access to free COVID-19 testing, and through many other initiatives in her hometown of Houston, Texas. Queen B has a heart of gold, and we thank her for everything she does. In the words of Michelle Obama, “You inspire all of us”, Beyoncé!

Girls rule, if you didn’t already know, and our favorite strong Black women shined last night. It was a pretty big night forMegan Thee Stallion, who won Best Female Hip Hop Artist and the Viewer’s Choice Award for the song we couldn’t get enough of last year, “Hot Girl Summer”. It wouldn’t be the BET Awards without a killer performance from the rap legend in the making. We got some serious Beyoncé “Run the World (Girls)” music video vibes with the desert scenery and warrior outfits, and we are SO here for it. Anyone want to ride some four-wheelers in the desert while dancing on dangerous steel structures to “Savage Remix”? Aah! (Okay, listen, we tried our best to imitate Megan).

Meanwhile, our girl Lizzowon Best Female R&B/Pop Artist and we’re so happy for her! The category also included Beyoncé,H.E.R., Jhene Aiko,Kehlani, and Summer Walker—OMG, like, how can you pick between these talented ladies?! And speaking of Summer Walker, she andUsher delivered a gorgeous duet performance, and their vocals together were a match made in heaven.

But possibly the best moment of the night in the name of #GirlPower that wasn’t featured on camera is Simone Bileswinning Sportswoman of the Year. Does the 23-year-old Olympic gymnast have enough space on her shelf for another award? You go, girl!

The BET Awards successfully captured the spirit of the times by including several performances surrounding the current Black Lives Matter movement and racial injustices faced by Black Americans.John Legend delivered a touching performance with his song, “Never Break”, an inspirational anthem to guide us through these tough times. He always knows just what to say and how to put on a show, even with just a piano amongst rubble in what feels like a hopeless environment. And those strong, smooth vocals? Yes, John!

Next up wasAnderson .Paak, who performed his powerful new groovy-funk protest song, “Lockdown” with Jay Rock, and it was a hard-hitting performance that felt like a check on the state of society today, mentioning COVID-19, police brutality, racism, and the Black Lives Matter protests. .Paak’s face was covered with fake blood and bruises to showcase the reality of what’s happening to Black Americans. The Black dancers absolutely slayed the stage, and Rock’s verse was emotionally moving.

Two words—Jennifer. Hudson. That’s all. Just kidding, but isn’t she just iconic? She honored the late Queen of Soul, Aretha Franklin, with a rendition of “To Be Young, Gifted, and Black”, a song originally by Nina Simone but one that Franklin covered in 1972. Hudson channeled the late Queen magnificently through the anthem emphasizing Black excellence. She belted out those vocals, brought tears to our eyes, and touched our hearts. We know the Queen is proud of you, Jennifer!

The most powerful performance of the night was Best Male Hip Hop ArtistDaBaby and Roddy Ricch’s “ROCKSTAR” remix. The original mix of “ROCKSTAR” went viral on TikTok this year, but in light of the recent Black Lives Matter protests, he and Roddy Ricch, who took home the Album of the Year and Best New Artist awards, created a remixed version to transform it into a reflective protest song. The duo used their platform at the show to make a strong statement and started the performance off with a montage of scenes from the protests, as well as a chilling view of DaBaby on the ground with a police officer’s knee on his neck, similar to George Floyd’s death which sparked the new wave of protests. It was heartbreaking to watch, but the two performing alongside “protestors” wearing “I amTrayvon Martin” and “I amBreonna Taylor” shirts on stage invoked a feeling of hope. The performance was an artistic masterpiece. Job well done, DaBaby and Roddy Ricch.

5. Lesser-known artist representation, we love to see it!

Larger award shows don’t always include up-and-coming artists in their performance list, so it was a refresher to see the BET Awards giving a platform to lesser-known artists who aren’t in the mainstream--yet.

Singer and songwriter LONR. delivered a lowkey performance of his dreamy love song, “Make the Most”, and it was peaceful amidst the more dramatic performances of his counterparts. His relaxing voice and lyrical talent enticed us to listen to the rest of his discography, and we’re impressed. Thank you, BET!

Chloe X Halle have been gaining more notoriety for their music ever since the release of their second album, Ungodly Hour. The sister duo delivered their signature divine harmonies and they sounded and looked like angels, and fierce ones at that. They performed “Forgive Me” and “Do It”, and viewers at home were blown away. Their outfits gave us some serious late-'90s R&B princess vibes, and these two are definitely on the road to becoming hip-hop royalty. Mark our words!

And that’s how it’s done! The 2020 BET Awards were full of surprises, and we loved being able to celebrate Black excellence from the comfort of our own homes. While the virtual experience was fun, we hope to experience it in-person and to catch the hot red carpet looks next year!

#BETAwards#BETAwards2020 The 2020 bet awards had to be the best award show I have seen in a while cuz I stopped watching awards shows cuz it got boring but I can honestly say this award show keep me throughly entertained & I loved it everything was fire ? no ?pic.twitter.com/bBVJddw0vM