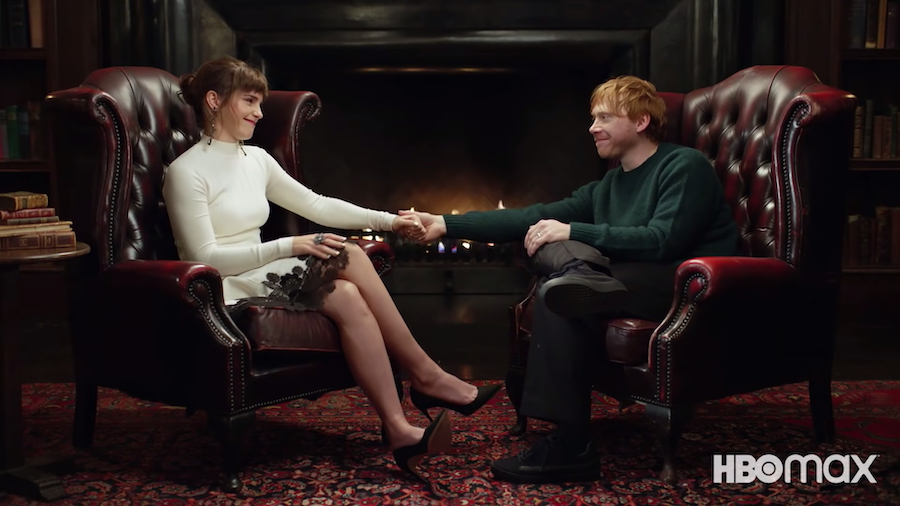 It’s been 11 years since the Harry Potter and the Deathly Hallows: Part 2 was released in theaters across the world, and 20 since we were first introduced to the all-star Harry Potter cast. For the 20th anniversary of the now-iconic movie series, Potterheads were given the chance to shed their muggle identity and join the cast back at Hogwarts for the HBO Max special "Harry Potter 20th Anniversary: Return to Hogwarts" which premiered on New Year's Day. While the nearly 2-hour special was full of fan-favorite interviews, here’s a short list of 7 magical moments from the reunion!

Remember Fawkes, Professor Dumbledore's Phoenix that swoops in to save Harry after he battles the Basilisk in the Chamber of Secrets? Well, the bird was a giant animatronic expertly crafted to behave like a real bird — something that Richard Harris (the late actor who played Dumbledore in the first two movies of the series) had no idea about. Instead, Harris thought the bird was real, and even commented on how well-behaved it was! “We never told him," said director Chris Columbus in an interview with Daniel Radcliffe. "He just thought it was a real bird."

While there were many somber moments both on and off the set, one especially poignant instance occurred after the death of Emma Watson’s beloved hamster, Millie, during the filming of Harry Potter and The Sorcerer’s Stone. Watson was “beside herself”, and the film's set designers ended up making her a custom coffin lined with velvet engraved with her pet’s name. The cast even had an on-set funeral for the animal! Watson has never forgotten Millie and in 2014 dedicated her British Artist of the Year Award to her furry friend.

Just like their characters, Oliver and James Phelps decided to get mischievous during filming for the Yule Ball in Harry Potter and the Goblet of Fire. For the wizard equivalent of Prom, Rupert Grint was nervous about dancing on camera (something he had never done before). Of course, the Phelps twins capitalized on this fact and told the unsuspecting Grint about a big dance number that they all had to spend hours choreographing and preparing for… only for poor Rupert to not have to dance during the scene at all!

4. Many Cast Members Were Fans of the Books Before Joining the Movies

Like the rest of us, many of the cast members were huge Potterheads! Emma Watson, who played 1/3rd of the Golden Trio as Hermione Granger, remembered reading the first book with her family when she was 8 years old. Matthew Lewis, who starred as the basilisk slayer Neville Longbottom, told interviewers he was going to a friend’s house for a sleepover where instead they both sat in silence reading the first two books and “never looked back”. Imagine how thrilled they were after being cast to play some of their favorite characters!

5. The “Magic” Behind The Great Hall

We get it. I mean, it’s THE Helena Bonham Carter! Radcliffe declared his love for Carter after she asked for an autograph to commemorate the end of the series filming. Luckily for us, he shared his confession out loud: "It was a pleasure being your co-star and coaster, in the sense that I always ended up holding your coffee. I do love you and I just wish I had been born 10 years earlier; I might have been in with a chance. Lots of love and thanks for being cool." Kudos to Radcliffe for shooting his shot!

Being in the limelight is hard, especially for a child actress. Watson mentioned that she wrote in her diary how lonely she was after becoming famous. Lucky for us, she decided to keep her role because she wanted to see the series through for the fans, who she said “genuinely wanted us to succeed.”

While Potterheads can still rewatch the special as many times as they want on HBO Max, we won’t have to wait much longer for more HP-inspired content! Fantastic Beasts: The Secrets of Dumbledore, the third movie in the Fantastic Beasts series, is coming out in April 2022! Until then… Catch you on the next train to Hogwarts!