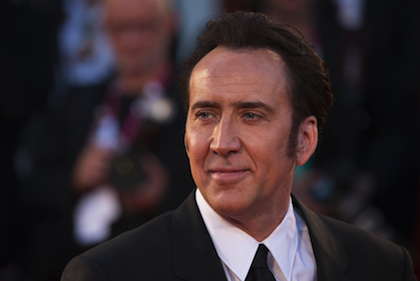 Welcome to the Cage Corner, where we only talk about the only actor that late critic Roger Ebert once called “the best actor in the world.” I am, of course, speaking about Nicolas Cage. What’s Cage up to these days? Well, after one of his latest films Left Behind did moderately well at the box office, where do you from there? Nabbing a supporting role in an Oliver Stone movie, of course!

Looks like this article will be a two-for-one special, because if you haven’t heard about Stone’s latest film, then you’re in luck, because I got the skinny on that, my friends. It’ll be titled Snowden, and much like the Cage Corner, you should be able to pick up on what it’ll be about. If you didn’t, hey, no judgments here. I took those tests when I was a kid too. Nothing seriously wrong, though, I am a little slow in writing and reading comprehension… why am I a writer again? Anyway, Snowden will follow the true story about the polarizing career of Edward Snowden, the guy who has the greatest job-quitting story ever by telling the entire American public that we’re constantly being watched by the NSA and who-knows-what other government facilities as well. So, he basically flipped the bird to his bosses on the way out of the office, but his office was all of America, which is why he fled for Russia.

How does one tell a story about a man like Snowden, who the public either sees as a hero, a traitor, or both? You get the talented Joseph Gordon-Levitt and then you sprinkle in some Nic Cage as… Wait. They haven’t said whom Cage will be playing, and this news comes over a week after Snowden has begun filming. So, Cage hopped onto a currently in-productin project quite late in the game, and may or may not know himself what role he is playing… Classic Cage! Personally, I hope Cage is either somebody that really pissed off Snowden and causes him to do all of this (Stone’s biopics aren’t always the most historically accurate), or is an agent sent out to try and hunt down Snowden.

Something else that makes this casting out of the ordinary is that, whether it’s a big film or a little film, Cage generally likes to take on leading man roles. It’s a rarity that he is simply in a supporting role. He’s actually really only done two in the past ten years (voice acting roles aside) -- In 2010, Cage was the supporting role of father/ superhero Damon Macready/Big Daddy in Kick Ass. If you happened to miss it, take a look below. He reminds me of a more butt-kicking version of Adam West’s Batman:

(Somehow I feel like this is what it’s like to have Cage as a father. Surviving bullet training followed by ice cream and bowling.)

Way back in 2007, Cage had another supporting role. This one was as Fu Manchu in the fake Grindhouse trailer made by Rob Zombie for his fake movie that has never actually been made entitled Werewolf Women of the SS (NSFW):

(Does this count as a supporting role? In my book, it does.)

I think that the already-most-likely-good Snowden will be 10% better now with the inclusion of Nicolas Cage in an unknown role. It’ll be fun to see him in action and being directed by Oliver Stone. It feels like this Cage/Stone crossover should’ve happened years ago. Also set to appear in Snowden is Shailene Woodley as Snowden’s real-life girlfriend Lindsay Mills. Snowden is set to release Christmas Day of this year.

In the meantime, check out Cage's visit to the YH Studio!