New NBC Series Spells Out Love From "A to Z" 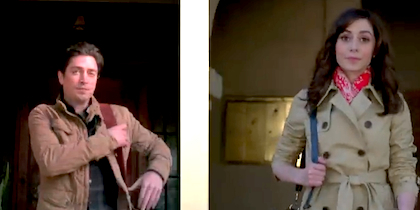 NBC’s latest romantic comedy fall series is called "A to Z", and it follows the relationship of Andrew, a hopeless romantic, and Zelda, a level-headed lawyer. But they basically explain it all pretty well in the promo.

Ben Feldman (Cloverfield) plays the cute and slightly obsessive Andrew, while Cristin Milioti ("How I Met Your Mother") is the smart and stubborn Zelda. The show is hilarious and witty while bringing a 500 Days of Summer approach to the series. Between the pair and their friends, the relationships on the show are very relatable and that’s what makes the show so appealing. One of the executive producers of the show is the hilarious and beautiful Rashida Jones.

The series premieres on October 2, but you can catch the pilot online right now! Watch it here!

Another interesting aspect of the show is that the narrator explains that their relationship will last for eight months, three weeks, five days, and one hour. Leaving the audience with the question of: Will they break up or get married, or will something even crazier happen?

Although the show is fiction, I wouldn’t be surprised of many aspects of our lives will be reflected in the show. We will be able to scrutinize their relationship and possibly learn a thing or two. Maybe we will even learn what not to do. Either way, the show brings something new and interesting to television.