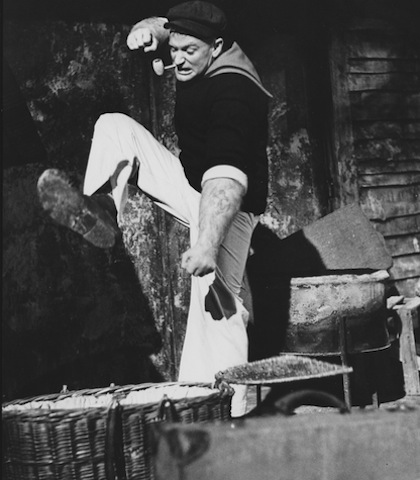 Welcome to Cinema Second Chances! This is the series that takes movies that have been unfairly criticized in the past and offers a fresh perspective on them with the hopes that they might be pardoned in the eyes of cinematic justice. It can be pretty hard for a film to shake the bad reputation it receives, and many out there probably never will. Oftentimes this is the case because the flick deserves it’s bad rep, but in other instances it is because it’s merely convenient for a film to remain harshly criticized because it is easy to do so and makes lesser authorities on the subject of film seem a tad smarter than they really are. Well, it’s all very complicated and would probably take a scientist to explain it, so let's just skip ahead and look at a movie.

With the recent passing of the great Robin Williams, it seemed only appropriate that my first article be about a movie that has always been near and dear to my heart. Popeye was a cornerstone of my childhood, and at least once a week, the halls of my home would reverberate with the sounds of the antics of Olive Oyl, Bluto, Whimpy, and, of course, Popeye himself. It was just a fun and exciting little musical that succeeded in capturing the hell out of my imagination and most likely annoying my parents due to how often that I demanded that the movie be shown.

But alas, I grew older and the cooky little town of Sweethaven and all of its eccentric citizens eventually settled back from the forefront of my imagination and took up residence in a little nook reserved for all things childish and nostalgic. But a month or so ago, I stumbled across Popeye on Netflix and I began to reminisce about just how much I enjoyed it as a child. Here was a chance to relive that joy while looking upon the film with a new and, hopefully, wiser perspective. At this point in my life, I know a bit about filmmaking and story structure, so I was curious to see if this little cinematic gem from my youth would hold up. I will admit I was a little nervous going into because I had read some old reviews of Popeye and was a bit saddened to realize that this movie wasn’t exactly loved when it came out. In fact, some people downright hated it. But... but... it’s Popeye for goshsakes! It’s Robin Williams talking in a funny voice and acting all goofy, and it’s directed by Robert Altman, the man responsible for bringing such wonderful movies to the silver-screen as Nashville, Gosford Park, andM*A*S*H (my 3rd favorite film of all time)! The point I was trying to make with myself essentially boiled down to that it couldn't possibly be as bad as all that.

Well, I have happy news to bring to you and the rest of humanity.Popeye definitely holds up, and from my perspective, the naysayers out there need to have a tea and relax. Is the movie perfect? I honestly can’t say that it is, as there are some pacing issues and moments where the movie slows to crawl as if it’s unsure of where to go. But those are just a few moments in what is an absolutely wonderful movie filled with intensely funny and brilliant pieces of physical comedy, heartwarming and catchy songs, and enough references to spinach and burgers to turn you off the stuff forever. I don’t exactly know how one would do a Popeye movie today or how it should’ve been done back then. He is a comic strip character come to life, and as such, Altman and his team created a fairly surreal world that is similar to our own and yet with a few things that are "off" here and there. I mentioned before that the physical comedy is great, and Williams of course nails the role of the title character in a way I am almost positive nobody else could. But it’s the moments of warmth and tenderness that really elevate the movie from being an average piece of entertainment to something a little more special. Robert Altman has always been known for introducing audiences to an extreme or highly specific type of setting or situation and letting the audience get swept away by the proceedings. But he has always found a way to bring the humanity of the story to the surface and his handling of Popeye’s journey is no different.

Popeye is a timeless piece of cinema that should be looked upon fondly and treated with the respect it deserves. Certainly Robin Williams and Robert Altman would later go on to do more memorable work, but for my money, Popeye is a little treasure that stands out on both of their filmographies, and for my money, one that they could be proud of.