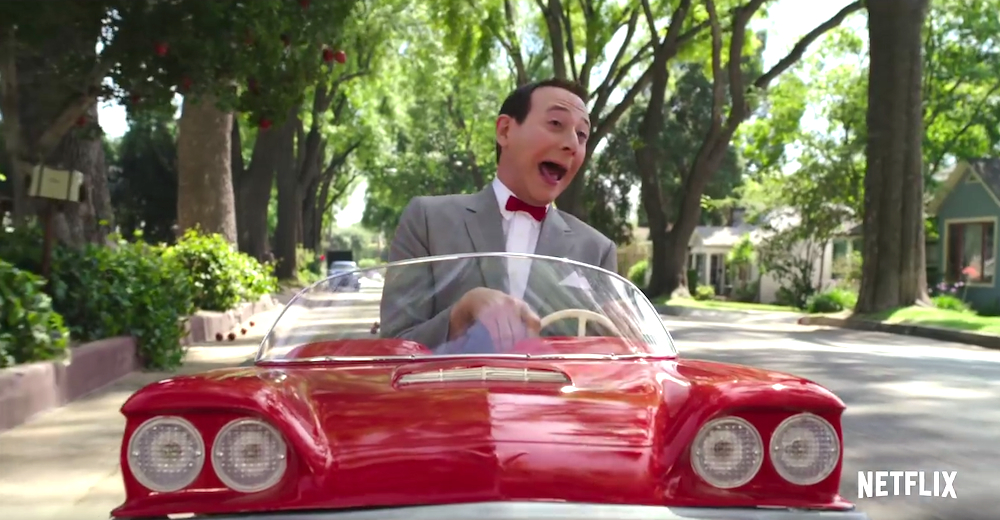 If there’s one thing I knew when I was a kid, it was that I loved Paul Reubens’s character Pee-wee Herman. I loved his movies (particularly Tim Burton's Pee-wee’s Big Adventure) and I was an avid fan of his TV show “Pee-wee’s Playhouse”, thanks to VHS tapes and a young mom, who was probably watching it not too long before I arrived. Then, when I was a teenager, I knew something different; I still loved all things Pee-wee (thanks to revival reruns of “Playhouse” on Adult Swim) and that he had a new movie on the way!

I couldn’t wait! All I knew was that it had Judd Apatow behind it and that it would “take us further from the playhouse than we’ve ever been before.” Then, all of sudden, Reubens and Apatow said they spoke too soon. My dreams were thwarted! The movie seemed like it was never going to be made…

Until now! With Apatow still working with Reubens behind the scenes as a producer, Pee-wee is returning and making his comeback on Netflix with Pee-wee’s Big Holiday! The date is set for March 18 and a trailer has just recently come out! Take a look below:

This is great! Classic Pee-wee with nothing to try and “modernize” him or make him into something different than the perfect being he is. With the days counting down in February, why can’t this darn month end already and leap frog into the middle of the next?! (Fun fact: February is the shortest month of the year, but why does this year have to be a Leap Year? That's an ENTIRE extra day of waiting!) You may notice that Pee-wee mentions he’s never left his hometown of Fairville and that this trip will be his first holiday. First off, if we want to get cynical for a second, Pee-wee’s life is a holiday, he just doesn’t realize that. Of course, if you are a true Pee-wee fan, then you know that the first movie takes place in Los Angeles, but let’s say for the sake of fun (what Pee-wee loves most) that the first movie took place in this town instead.

If you’re still following me, then hear me out, because he does mention that this will be his first holiday. Even though he traveled all over the country in Pee-wee's Big Adventure, that was more business than pleasure. (That business being, finding his stolen bicycle while going on the completely wrong path thanks to a shifty fortuneteller.)  So when Pee-wee says this will be his first holiday, it really kind of is. It’s not his fault he’s got life completely figured out and lives it like a vacation everyday. That’s just our faults for not living like Pee-wee.

Do you want to live like Pee-wee? Before Pee-wee’s Big Holiday hits Netflix on March 18, be sure to catch his other movies, like Pee Wee’s Big Adventure, and his classic kid’s show (which has a grand amount of adult humor sprinkled in it) “Pee Wee’s Playhouse” to get caught up on all things Pee-wee, as well as learn how to live the life of chaotic leisure from the master himself!