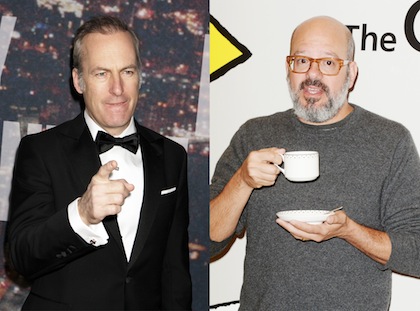 Let me take you back to a time before Bob Odenkirk was defending criminals in New Mexico as Saul Goodman in “Breaking Bad" & "Better Call Saul”, and even before David Cross was afraid to get naked with his wife (and anybody else) as Tobias in “Arrested Development”. This time was an era in the mid-'90s when Odenkirk was fed up with only being a writer at “SNL” and Cross was out of a job after his writing gig on the short-lived “The Ben Stiller Show”. Both jobless but filled with creativity and a passion for making things weird, they pitched a show to HBO that would become the legendary “Mr. Show with Bob and David”, which is considered to be the closet thing America has to “Monty Python’s Flying Circus”.

Since “Mr. Show” ended in 1998, both comedians have enjoyed great careers separately, but now seems to be the perfect time to bring the two together once again for another sketch show. Netflix, who has been very busy lately in bringing back old TV shows and developing brand new original content, has struck a deal with Odenkirk and Cross to bring back “Mr. Show”, only it won’t be called that. Instead, the show will simply be called “With Bob and David”.

What great news for fans of this completely weird sketch show, like me! There’s plenty of awesome hilarity that went on this show, and it also served as either a launching pad or a good stepping-stone for such comedians as Sarah Silverman, Jack Black, Scott Aukerman, Paul F. Tompkins, and even Tom Kenny, who is the voice of SpongeBob Squarepants, the Ice King from “Adventure Time”, and countless other cartoon characters you know. Paul F. Tompkins even tweeted back in December about this new run of the show before the news was officially released. He posted a picture of himself hanging out with Odenkirk, Cross, and Brian Posehn, among others, with the tweet saying, “Eight men out… of the 1990s. Maybe something new coming from the Mr. Show gang in the new year? #MrShow”. So, I think it’s safe to say he’s on board as well.

Netflix’s deal with Bob and David will consist of 4 half-hour-long shows and a one-hour special on the making of. I guess if this goes well, then more from “With Bob and David” will show up after this first limited run. Until then, if you haven’t checked out any of “Mr. Show” before, most, if not all, of the episodes are on YouTube. Despite originally being an HBO series, it is one of a select few HBO shows not on HBO Go, so don’t even bother hassling your neighbor for their HBO Go account for this one. When asked why “Mr. Show” isn’t on HBO Go, Odenkirk, Cross, and Posehn each had a different answer.

(Odenkirk) “HBO has a hate-hate relationship with the show. ”

(Cross) “They hate having to Google Mr. Show.”

(Posehn) “They are not aware that we did the show. ”

Whatever the story is with HBO and “Mr. Show”, who cares? Check it out for free below on Youtube!