NCT Just Revealed Their MBTI Types and Now We're Recommending Movies For Them! 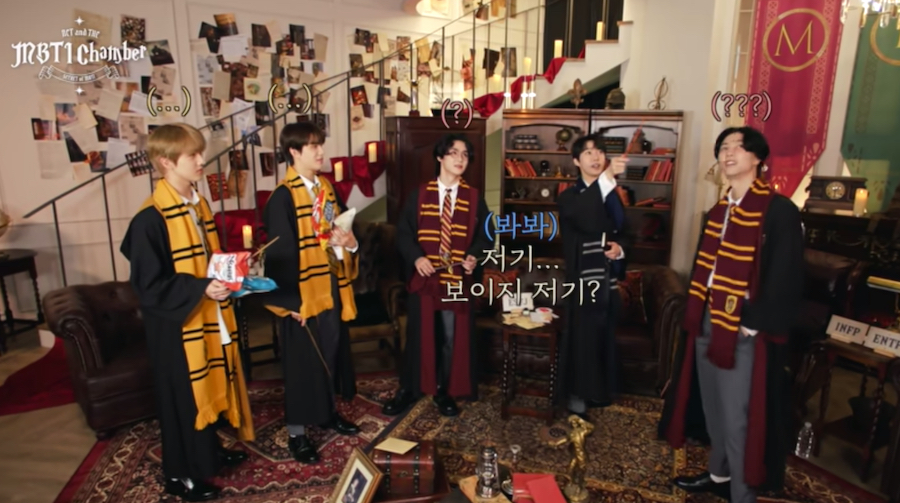 Sungchan, Jisung, Jungwoo, Kun, Doyoung, and Johnny of K-pop group NCT revealed their MBTI types to fans in the "MBTI Chamber" YouTube video posted to the official NCT channel. Dressed in Hogwarts robes and equipped with wands, the boys took turns at SM HQ discussing their different "houses" (MBTI types) on a set resembling the Hogwarts Great Hall. From arguments over pride to discussions about friendship, the boys revealed a great deal about their personalities and habits.

The MBTI test, or Myers-Briggs test, is a questionnaire that helps indicate different psychological preferences in the way people use their perception and judgment. Okay, so what does that mean? Well, it means that, through the results of this test, we can accurately gauge a person's likelihood to participate in certain events, engage in specific hobbies, and even accomplish certain goals. The MBTI test reveals what a person truly values in life, whether that be dignity, family, freedom, etc. Our personalities are reflected in everything we do, even what we prefer to watch! By using the descriptions of the different MBTI types, we have determined what type of movie each of these members of NCT loves most!

Sungchan is an ESTP. According to Myers-Briggs, ESTPs are "observant, action-oriented, and energetic", they love fast-paced environments and being at the center of all the hub-bub. With this in mind, we think Sungchan would love a good action film. ESTPs need constant stimulation to keep them interested in a task. When watching a film, a fast-paced and cast-abundant one is needed. Aside from Marvel movies (especially Avengers: Endgame), we think he would love Top Gun: Maverick and the Jurrasic World series. These films are packed with talent and scenes that will make you sit on the edge of your seat. Sungchan would appreciate these films for their intense stunt work and chaotic plots!

Jisung has revealed himself to be an INFP. INFPs are “passionate daydreamers” and are known to be “sensitive and idealistic”. INFPs love inventing stories in their minds and approach life in creative ways. For these reasons, we believe Jisung loves movies with deep and involved storytelling and world-building. Movies like The Lord of the Rings or Harry Potter would be a perfect fit for Jisung. The carefully constructed worlds presented in these film franchises aids itself to be imaginative and stimulates inspiration. The well-developed storylines and mythical settings reflect the deep conversations and daydreams Jisung has going on in his head everyday. No wonder Jisung is known as the quiet one -- he’s too busy living his best life all in his mind!

Jungwoo has confirmed himself to be an INFJ, but who’s surprised? INFJs are “thoughtful and imaginative” and they stand to make a difference. They are fulfilled by “helping others and doing good in the world.” Who could expect any less from Jungwoo, who is always doing his best to make the members laugh, whether it be through silly jokes or his adorable aegyo. We think Jungwoo would love a good drama, especially one with a quirky main character attempting to navigate through life with good intentions. Forrest Gump or the French hit Amélie would be a great fit. Both films feature misunderstood main characters who struggle to navigate a world that feels too big for them. These films teach audiences that, no matter who you are, you can make a stand and create a difference in the world. We think Jungwoo would identify with these sentiments!

Kun is an ESFJ, who are “people-focused” and spend a lot of time getting to know their community and caring for others. They love offering guidance and “always try to do the right thing”. As leader of NCT sub-unit WayV, these traits come as no surprise. Kun is a natural-born leader who cares about his members and always tries to keep them on track when they may be misguided. Since Kun values coming-together and working through problems, we think he’d love a family feel-good movie. Movies like Alexander and the Terrible, Horrible, No Good, Very Bad Day and Daddy Day Care fit the bill. These films center around main characters who are at a new stage in their lives and not sure how to navigate through it. With the help of friends and family, they work through the chaos and laugh about it together in the end. A mix of comedy and nurturing relationships, these films represent what Kun strives to make his life resemble.

Doyoung is an ISFJ personality type. ISFJs are “hardworking and devoted” and they feel responsible over the moods of those around them. They are affectionate and often “shower loved ones with gestures of care and support.” Makes us think back to all the times Doyoung has made sure members had enough food and rest! This sweetheart would love a good romance film. Films such as The Notebook, Roman Holiday, or even Twilight would be a great fit for this empath. Doyoung loves caring for others and seeing how his actions can make people feel better, so he would love to see the same storyline play out on screen.

Johnny has divulged that he is an ENTP. ENTPs are “quick-witted and audacious”, they love debates and aren’t worried about going against the status quo. They have an intense sense of humor and love poking fun at people (all in good spirits!). It’s no wonder Johnny makes us laugh so hard during the JCC (Johnny’s Communication Center) videos. Johnny loves to entertain people and never fails to provide thought-provoking commentary. For this reason, we think Johnny loves dark comedies. ENTPs have a specific sense of humor that involves shocking or contrarian ideas. Dark comedies are filled with witty comebacks and audacious comments that may not be the taste for everyone but certainly attracts this personality type who thirsts for something fresh and new in entertainment. Movies like Heathers or the Netflix hit Don’t Look Up may be a great fit. Both films present dangerous situations through the light of comedy but also leave the viewer deep in thought about life and its many facets. These films would fulfill Johnny’s hankering for debate and humor.