Most Popular Black Cats In Movies and Television! 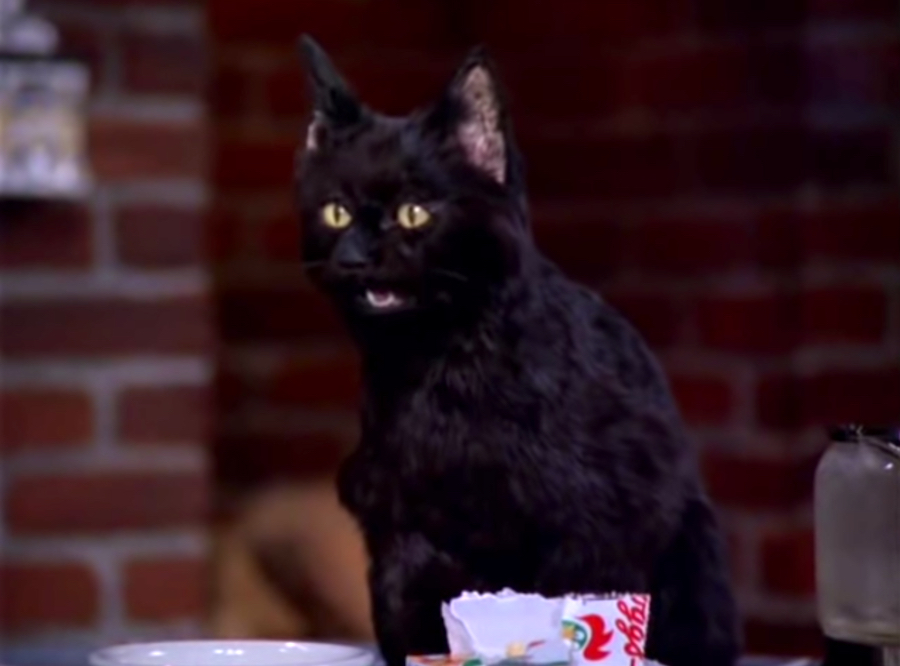 Did you know that we’re upon yet another cool holiday? We’re talking about the Lunar New Year, which marks the beginning of the year according to the lunar calendar. It is celebrated in various countries, and this year we’ll be welcoming the New Year (once again) on January 22! Each year has a different symbol, which may vary in different cultures. For instance, in the Vietnamese zodiac, 2023 is going to be the Year of the Cat. According to the Chinese horoscope, 2023’s “master” is the Black Water Rabbit (or the Black Cat, since this is a dual sign). So, in honor of such an awesome holiday, let’s talk about its symbol a little bit!

Cats are considered probably the most mysterious animals on this planet. There are lots of legends, myths, and superstitions connected with our furry friends, especially black cats, who have sadly and unwittingly become an omen of bad luck. But those of us who own black cats know that nothing can be further from the truth! Cats also make the best characters in movies or animated films (see: Garfield, Cheshire Cat, Puss in the Boots, etc.). Today, we’re going to honor all of the amazing black cats in films & television and prove that they’re no bad luck at all!

If you’re a '90s kid who uses sarcasm on a daily basis now, there’s a good chance that Salem was your favorite character. The famous cat from "Sabrina the Teenage Witch" was actually a 500-year-old wizard, who was sentenced to spend another century as a cat. He never failed to impress with the best sarcastic jokes and comebacks, and always gave wise advice to Sabrina, as well as to her two aunts. Even though the show ended years ago, people still love using memes with Salem and his hilarious one-liners.

Who wouldn’t want to have such a loyal furry friend like Coraline did? The Cat wasn’t the main character of the story, but he definitely stole the show. Even though the Cat couldn’t talk in the real world (unlike the other world), he sure knew how to make his point and prevent Coraline from facing another danger. And he, like Salem, was a ball of sarcasm. Maybe it’s a common thing for all black cats?

Thackery was an ordinary 17th century boy who was transformed into an immortal cat by the evil (but awesome) Sanderson sisters. He spent his countless days guarding the witches' house, making sure nobody lit the black flame candle. When modern-day kids Max, Dani, and Allison lit the candle, Binx did whatever it took to help the friends defeat the sisters. At the end of the movie, his soul leaves the cat's body and finally reunites with his sister. Such a bittersweet moment!

Every evil queen must have her even more wicked cat -- at least that’s what we learned from Cinderella. Despite being super lazy, he always helped Lady Tremaine with her evil plans. So even though he was an antagonist, we can give him credit for his loyalty. If Lucifer was a real cat, we’re sure he’d win the internet with his fluffy tail, grumpy face, spoiled attitude, and numerous mischiefs.

And the award for the Cutest Black Cat of the list goes to Jiji. The talking cat from Studio Ghibli managed to rock his cliché role of being the companion of a young witch with excellence. Just remember the sweet scene when Jiji sees a mug with an image of a black cat on it? Aww! At the end of the film, Jiji stops talking, which still remains quite a big mystery for the fans. According to Hayao Miyazaki, the creator of the film, the young witch and her pet lose their ability to communicate because Kiki grows up and doesn’t need her “other self” to rely on anymore.

The most famous cat in a space (before Goose the Flerken) was actually a shape-shifter. Isis accompanied Gary Seven to Earth, and these two seemed to have a telepathic connection, being able to communicate without words. Isis could turn into human too but never spoke like one.

Felix is the oldest character in our list, as he was created in 1919 during the silent film era. He was the first fully realized animal in American film animation history, how cool is that? He’s one of the most popular and recognized animated cats in pop culture; people still make films, cartoons, comics, and computer games with Felix as the main character. Hats off to the oldest black cat!

Remember the times when we all dreamed about becoming a Sailor Guardian, wearing fancy clothes, and having a magical talking cat? Luna is the most iconic cat in the history of anime, as she has a golden moon on her forehead, which looks absolutely fierce! She was the mentor of Sailor Moon and other Sailor Guardians. Other than talking, her power was to summon different items from thin air. This superpower would come in handy in our daily lives, wouldn’t it?