"Midnight, Texas" Is All Your Favorite Supernatural/Horror Shows Rolled Into One! 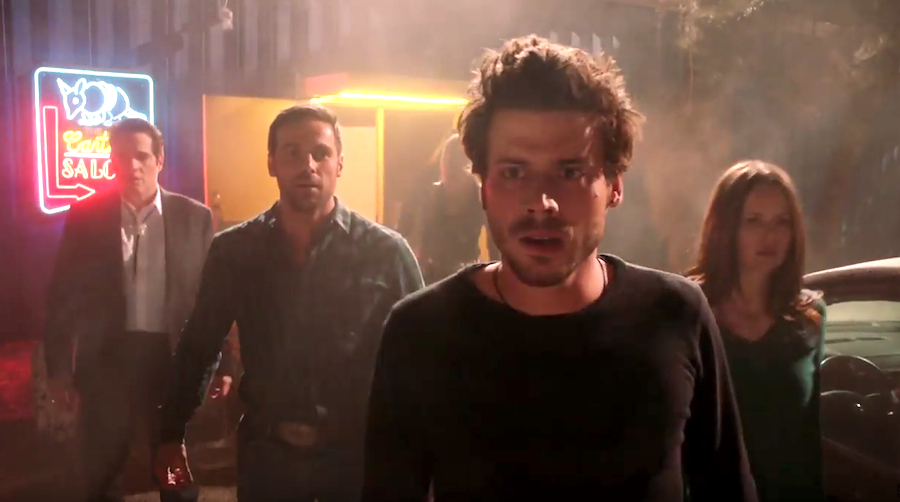 Calling all fans of supernatural forces and sci-fi TV -- NBC’s newest television drama “Midnight, Texas” is for you!

In the small town of Midnight, things aren’t as quaint and innocent as they seem. Based on the book of the same name by Charlaine Harris, the show follows Manfred Bernardo, a psychic who can see and talk to ghosts, as he takes refuge and makes a home in Midnight alongside some very unusual neighbors. With the classic hints of will-they/won’t-they romance between humans and supernatural beings and talks of secret, dangerous pasts, it’s safe to say that “Midnight, Texas” has a very similar structure to almost every supernatural show you’ve ever seen, and, well, it’s kind of interesting.

With vampires, witches, and ghosts galore, the tiny Texas town serves as the headquarters, if you will, for all supernatural activity – creating a safe haven for outsiders and the otherworldly. Basically Midnight, Texas, sits on top of Hell, so if you’re thinking “Hey, that sounds a lot like the Hellmouth that lived beneath the town of Sunnydale on 'Buffy the Vampire Slayer'”, you are not wrong. Midnight, Texas, is the southern-accented, cowboy hat-wearing, BBQ-eating cousin of Sunnydale, California. However, in this show, it’s especially hard to discern the difference between Good and Evil and, strangely, the vampires don’t appear to drink blood. (I know. It’s weird.)

The string of books that “Midnight, Texas” is modeled after were written by the same woman who wrote The Southern Vampire Mysteries that served as the basis for HBO's “True Blood”, which makes all of the vampire and supernatural similarities seem fitting. The citizens of Midnight are quite interesting, and all seem to have a hidden backstory that I’m sure will each make for some kind of huge revelation this season.

There’s Bobo (yes, that’s his real name), who runs the local, creepy pawnshop. He, along with Creek, the love interest for Manfred and who appears to be Midnight’s version of Rory Gilmore, seem to be the only "normal" people in town. Then there’s Fiji, the resident witch with a talking cat (think Salem from “Sabrina The Teenage Witch”). Back to the vampires that don’t drink blood, Lemuel is the only vampire that has made an appearance so far. His piercing blue eyes give him a mystical, entrancing look, but a very dangerous one at that. Arielle Kebbel, who plays Olivia, keeps finding her way into supernatural TV, but hopefully she lasts longer in Midnight than she did on “The Vampire Diaries”. They don’t tell us a lot about her in the first episode, but we can assume she’s got some major skeletons hidden in a closet somewhere – possibly some that involve her intimate relations with Lemuel. In addition to the relatively normal creatures on this show are a couple of weird ones – a fallen angel named Joe and a weretiger that takes the human form of the town’s Reverend Sheehan. The combination of these characters definitely leaves room for interesting content.

Then there’s the new guy, psychic Manfred. Let’s talk about the main character’s abilities for a minute. In the first ten minutes of the show, Manfred assists a woman in talking to her dead husband, and I’m not talking sappy “Hollywood Medium with Tyler Henry” style ghost-talking, I’m talking about gruesome, ghost-tries-to-kill-said-ex-wife-with-a-piece-of-broken-glass kind of ghost-talking. If you’re familiar with “Supernatural”, you’ve seen this type of big bad character a thousand-and-one times. Yes, Sam and Dean aren’t psychics, but I’d like to think that, if you combined them into one, you’d get the dark kind of brooding, sarcastic, knows-how-to-deal-with-all-sorts-of-“beings” character of Manfred Bernardo.

If you have any interest in supernatural shows, “Midnight, Texas” is definitely worth the watch. For every bit that it is cheesy, it is entertaining and intriguing. It is unexpected and refreshing to see a show of this nature find a home on network television. It will be incredibly interesting to watch how this season plays out, what secrets are revealed, who dies (because, let’s be honest, someone always does), and whether or not it will see a second season. “Midnight, Texas” delivers such unique twists on so many of our favorite stories combined with various authentic and unexpected storylines, which makes it impossible not to get hooked. You won’t necessarily want to live in Midnight any time soon after watching, but you will care about what comes next for all of the people and creatures who do; and, hey, isn’t that the best sign of good TV?

Check out Young Hollywood’s interview with the “Midnight, Texas” cast at San Diego Comic-Con below!