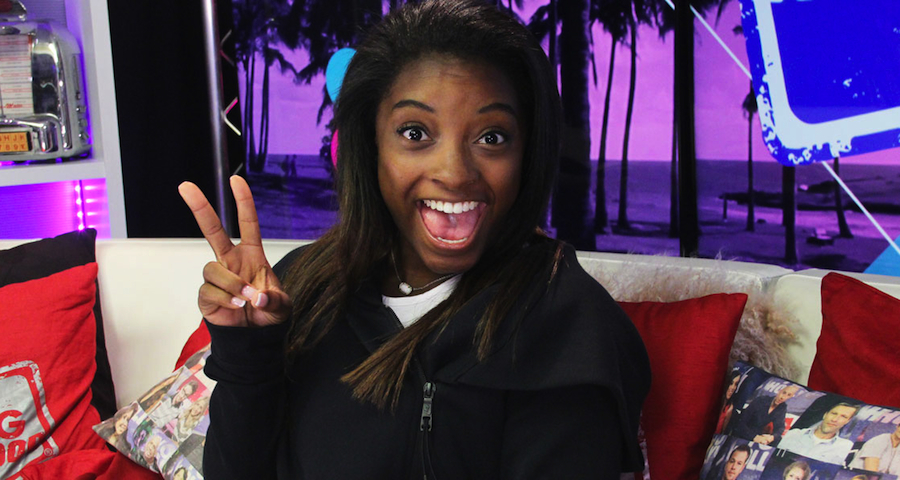 Simone Biles -- Olympic gold medalist, gymnastic powerhouse, and all around superstar – stopped by the Young Hollywood Studio recently to talk everything from her nominations at the 2017 ESPY Awards to jamming to The Chainsmokers this summer.

After finding huge success at the 2016 Summer Olympics in Rio de Janeiro, Brazil, Simone, at just 20 years old, holds the title for the most decorated American gymnast. Considering her infamous routines, charismatic energy, and the incredible power she possesses, there’s no question why people have coined her the new queen of gymnastics. Simone is all of four feet and nine inches tall, but she is such a massive force to be reckoned with.

But don’t let her 14 medals fool you; Biles is totally like other 20-year-olds! Well, besides her three nominations at this years ESPYs, including a nom in the prestigious Best Female Athlete category. Mostly speechless about landing in the same category as tennis pro Serena Williams, WNBA star Candace Parker, and swimming sensation Katie Ledecky, Simone couldn’t contain her pride. “It’s crazy to be in that category with them, but it’s exciting,” she said.

While most of her time is spent training, as the best American gymnast would, she also takes time to hang out and have fun, like stopping by the “Dancing With the Stars” tour to visit her former TV dance competition partner Sasha Farber or obsessing over her celebrity crush Zac Efron – who, to Simone, looks his absolute best right now. We couldn’t agree more!

Known as being brave and incredibly daring, Simone and the rest of the Biles clan recently vacationed in Hawaii where she got to do one of the most daring things she’s ever done – swim with sharks! “I wanted to freely swim with them, but my mom said no,” she said. Yikes! But just how willing would she be to do something like skydiving? “It’s a perfectly good plane. I don’t know why you would jump out,” she joked.

As Biles continues her incredibly deserved time off from the Olympic limelight, we can’t wait to see what huge endeavors she conquers next!

Watch our interview and a game of "Never Have I Ever" with Simone below!