Looking Ahead to "House of Cards" Season 3! 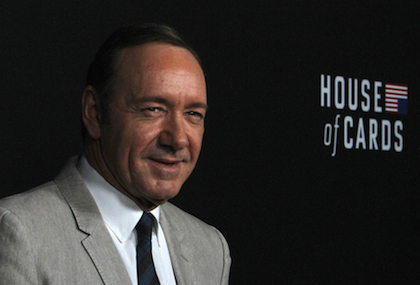 The time has come! The premiere date for Season 3 of Netflix's "House of Cards" was announced earlier this week, and that highly-anticipated date is February 27, 2015. Mark your calendars now!

In signature Netflix fashion, the entire season will be available on this date so that fans can access all the episodes whenever they desire to watch. For me, that will be February 27, 2015.

It’s been almost a year since Season 2, and I, much like the other fans, are dying to know what the series has in store!

Season 2 left off just after the main character, Frank Underwood, was sworn in as President of the United States!

How are you going to do that to us?!

We never really knew what Frank’s plan was until he put it into action. Since the first episode of Season 1, it was not clear how far Frank would go to get his revenge on the President and his cabinet, but it seems as if Frank’s goals have been reached at the end of the second season!

What else does Frank have planned? Especially now that he is the most important person in the United States! And what happened to Doug?!

Now, I know that we still have a couple months before Season 3 comes out, but there is still plenty of preparation to do. Aside from re-watching the first two seasons, it may be in our best interest to check out the British version from 1990. Much of the plot is similar to the U.K. version, which leads many people to wonder whether the Kevin Spacey version will end the same way. The U.K. version is much darker than the U.S. version (if you can believe that!). If that is the case, then it may not have a happy ending for President Underwood... but who wants a happy ending, anyway?

Only time will tell, but we do know that Pussy Riot, a Russian activist-punk band, will be guest-starring as themselves on the show sometime during Season 3.

So, the date to remember is February 27, 2015. Till then, I’ll be studying up on the U.K. version of the show in hopes of being able to predict what Season 3 might have in store. Chances are I’ll be wrong. But that is the beauty of "House of Cards"; there are surprises at every turn.

Just for funzies, check out this piece on "House of Cards" in which I imagine a college course taught by Frank Underwood, plus our YH Studio chat with actress Rachel Brosnahan!