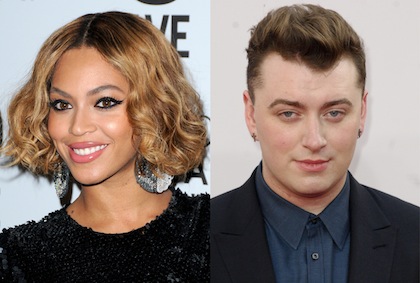 One of the most exciting times of the year has finally arrived! The first batch of nominations for the 57th Annual Grammy Awards have just been released (yay!), which means the internet is buzzing with who will reign as the most powerful artist of 2014. With that being said, British crooner Sam Smith, super-producer Pharrell, and long-time queen Beyonce (who just became the most Grammy-nominated woman of all time!) will be facing off at the 2015 Grammy Awards Show, with each of them receiving SIX nominations altogether!

Sam Smith’s smash-hit song “Stay with Me” has scored him nominations for Song of the Year, Record of the Year, and Best Pop Solo Performance, while his album In the Lonely Hour got recognized for Best Pop Vocal Album. He’s also nominated for Best New Artist! Queen Bey has been nominated for Best Urban Contemporary Album for her self-titled album Beyonce,“Best R&B Performance and Best R&B Song both for “Drunk In Love”, as well as Best Surround Sound Album and Best Music Film. As for Pharrell, he's recognized not only for his own work but also for his contributions to the works of Ed Sheeran, John Legend, and Beyonce. All three will be going up against each other for the coveted Album of the Year award!

This is sure to be an intense and eventful show, because various artists are going up against each other in multiple categories! Other nominees include industry heavy-hitters such as Taylor Swift, Iggy Azalea, and Miley Cyrus. Swift is in the running against Smith for Song of the Year and Record of the Year for her hit “Shake It Off”, while Iggy joins Smith and Swift for Record of the Year for her track “Fancy”. Iggy is also competing for Best New Artist against Bastille, Haim, and Brandy Clark. So far, Miley’s name hasn't popped up too often on the nominee list, but her album Bangerz put her in the Best Pop Vocal Album category.
Even the late Joan Rivers received a posthumous nod for Best Spoken Word Album for her work Diary of a Mad Diva. What a wonderful way to honor the legendary comedian!
So, who’s going to take over the 2015 Grammys? Find out when they air live on February 8 from The Staples Center in Los Angeles. You can access the current nominee list here.
Good luck to all contenders!
(Photos via WENN)
- Nicole Koch, YH Staff