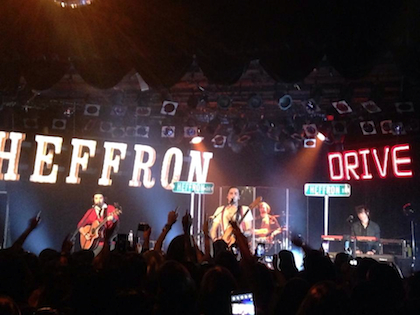 “Excuse me while I turn up the volume…”, because you all need to hear what Kendall Schmidt from Big Time Rush has been working on!

In case some of you didn’t know, before BTR got started, Kendall was in a band called Heffron Drive, which consisted of himself and his friend Dustin Belt. Named after the street they lived on in Burbank, California, the musical duo covered songs and started writing and creating their own music. Together, they released five songs via YouTube and Myspace.

However, the band was put on hold when Kendall got his role on "Big Time Rush". (Check out the band's visit to the YH Studio here!)

But Kendall did not forget about his band or his friend Dustin. In fact, Dustin, AKA D-Belt, played guitar on BTR’s tours over the past couple years, and while on the road, the duo kept writing music and were eager to get Heffron Drive going again.

With the end of the BTR television series earlier this year, Kendall and Dustin have had time to focus solely on Heffron Drive. Eventually, HD built up enough of a following to go on tour… in Germany! How awesome is that? They played five shows in May of 2013!

Heffron Drive has been keeping up the momentum. They recently finished their first American tour last month, ending with a show in their home state. They performed at the Roxy Theatre in West Hollywood, and it was quite a show, playing their five original songs and a few new ones for, who knows, maybe a sneak peek of their upcoming album? They also sang a pretty awesome rendition of Avicii’s “Wake Me Up.” My friend looked at me surprised when they covered the song, saying, “isn’t this song from a machine?” They broke out the tambourines for this one, and it was well worth it.

Shout out to their opening bands Ariana & the Rose and Eric Dash for putting on great sets too! You can check out more information about the openers on their official websites.

Seems to me, these boys have worked hard to make their dreams come true. It must be that... Heffron drive. [*RIMSHOT*] Sorry, I’ve been trying to stop myself from using that pun through this whole article, but I couldn’t! Nonetheless, everyone here at Young Hollywood is dying for more HD, so come on, Kendall and Dustin! Don’t leave us hanging!