"The Louise Log" Webseries Gains Momentum Thanks to Crowdfunding 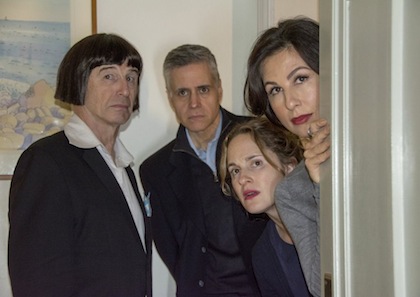 "The Louise Log", a unique comedy webseries created by Anne Flournoy, is based on the inner life of a real NYC housewife. Louise (said housewife) shares with the audience her confessions and stories about her family and being a little sidelined from her dreams.

Initially, the webseries started out with zero budget, a lot of novice crew and actors, and a great concept. Six years later, the show is 34 episodes deep and Shorty Award-nominated, with critic Roger Ebert, playwrite Eve Ensler (writer of The Vagina Monologues), and comedian Suzy Soro all giving it their support.

The show definitely holds on to a feel of the theater but brings in the opportunity to get up close and personal in the main character’s thoughts. Based in Greenwich Village, Louise faces drama such as they sexual tension one might feel for a stranger repairman, the challenges of interviewing babysitters, bullying a bully, juggling work life and romance, and, fittingly, things that occur while shooting a webseries. We watch as Louise whispers her thoughts, taking what could be mundane day-to-day life into a much deeper and funnier place.

Season 3 is getting ready to kick off thanks to the $12,000 they crowdfunded to keep it going. Ten new episodes will begin in this month.

Creator Flourney said: "Having the audience finance the production gave me a huge boost in confidence to go crazy with the script. Lucky for me, wizard co-writer Mordecai Green found a way to turn the crazy into stories. Add wildly talented actors and our only real problem was having to cut in the middle of takes because the cast was breaking up laughing."

The cast is made up of people from Broadway and Off Broadway, so the talent level is beyond solid. Actress Morgan Hallett will be making a replacement as the main role of Louise, and Everett Quinton will be coming on to play her father-in-law.

Check out a clip of the new season:

You can watch the rest of the webseries on YouTube and keep up with the rest at thelouiselog.com.