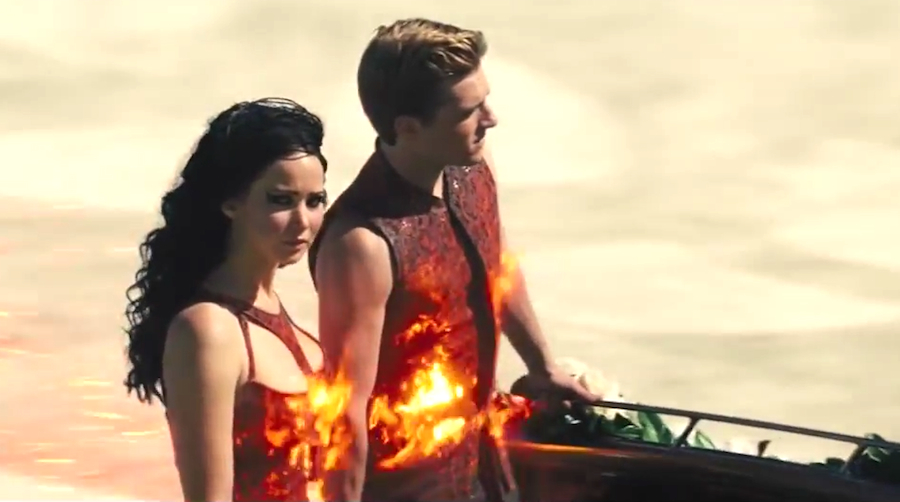 You know her, you love her, it’s the Girl on Fire!

The final installment of The Hunger Games, Mockingjay -- Part 2, premieres TOMORROW! It’s the end of an era and Katniss’s last chance to defeat President Snow. Katniss is a great leading lady who is intelligent, strong, caring, and courageous, but she's also compassionate and uneasy in her role as rebel leader, which makes her a lot more relatable than most movie heroines.

No doubt this final chapter in Katniss's journey will see her pull out all the stops in order to rescue Panem from tyranny, and if any of these previous badass moments are any indication, she's sure to be successful!
1. The 74th Hunger Games
Even before she becomes a tribute, Katniss is a force to be reckoned with. She is strong, powerful, and brave. But the moment that speaks volumes about her character rather than her brawn was when Katniss volunteered as tribute in place of her sister, Primrose. It just goes to show how much love she has for her family and that she would do anything for them, even putting her own life on the line.

It was a small moment from the second film, but it was a MAJOR! After finding out that Katniss and Peeta have to go back in the Games -- YIKES -- they once again have to take part in the Tribute Parade. Katniss has quite the stare down with President Snow if you ask me. She shows no fear, even to the most powerful person in The Capitol. You go girl!

As The Capitol attacks many of the districts, Katniss becomes the face of the rebellion. She is The Mockingjay. When she witnessed a bombing at District 8, she sends out a message to the rebels that she is alive and that The Capitol will never treat them fairly. She calls out President Snow at his own game. Her speech was motivating, inspiring, and determined. "FIRE IS CATCHING, AND IF WE BURN, YOU BURN WITH US." #GIRLBOSS

This one is left up to you. We know there will be an array of unforgettable Katniss moments in Part 2, and we can’t wait!

Even though we are sad that the series is coming to an end, we are so happy that we got to witness so many incredible moments from Katniss. Hats off to Jennifer Lawrence for reminding us that strong women are beautiful, inside and out!

Be sure to Tweet us YOUR favorite Katniss moments from Mockingjay -- Part 2!