Netflix Wants You To Have "A Very Murray Christmas"! 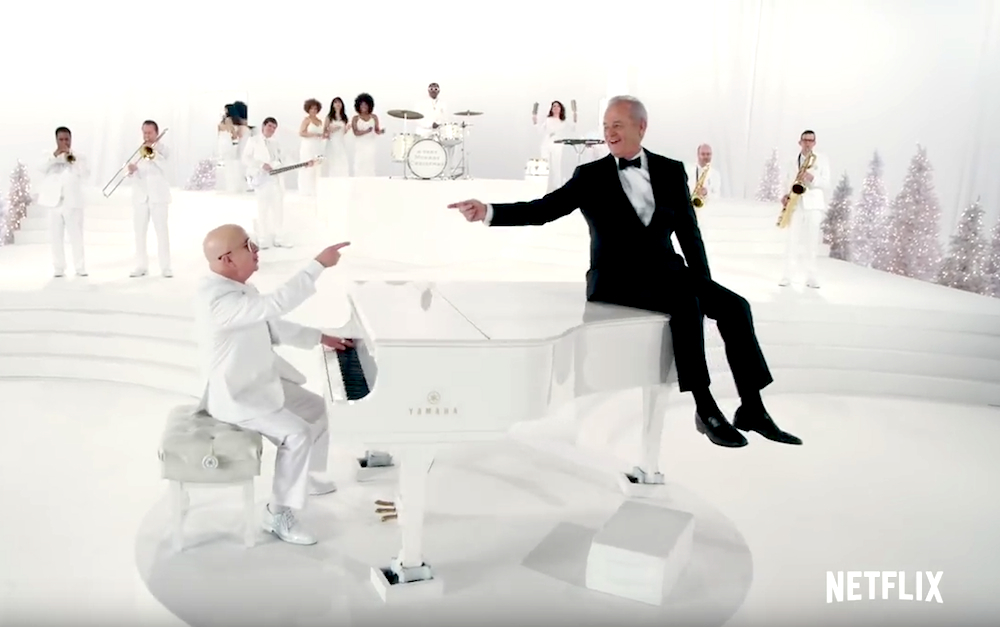 ‘Tis the season to be jolly, fa la la la la la -- okay, so it isn’t quite time to be jolly just yet, but thumbing my nose at societal norms is a tradition that carries more weight with me than making chocolate-covered pretzels and watching White Christmas. And believe me, after a month of eating chocolate-covered pretzels, I tend to carry some serious weight. It’s hard not to find yourself getting into the Holiday Spirit a little early, what with so many lights and displays popping up left and right. You can try to ignore these things and just focus on that cheerful family dinner around the corner and the stories of pilgrims journeying across troubled waters to find a land that would accept their practice of slathering every piece of food with cranberry sauce, but the allure of Christmas (if that’s your thing) is pretty hard to fan away, and people like Bill Murray and Sofia Coppola are making it all the harder. That’s right, the team behind Lost In Translation (the most romantic film ever that isn’t about falling in love) are back, and this time the secret they are whispering into our collective ears is “Merry Christmas”!

That’s right, the man, the myth, and the Murray is coming into your homes on December 4th via Netflix to bring to you a good old-fashioned Christmas Special. The premise here (in case you forgot to watch the video) is that Mr. Murray is gearing up to host a star-studded special from The Carlyle in New York City. Unfortunately, a blizzard (the natural enemy of all Christmas Shows) shuts down the operation and all appears to be lost. But in order to salvage the holiday spirit, Murray and his friends (including Miley Cyrus, George Clooney, Amy Poehler, & more!) will perform the show anyway, and as long as the champagne and caviar holds out, then all involved just might end up having a more Merry (or Murray) Christmas than they ever thought possible. The idea of this Special alone just makes me want to toss up the old Christmas Tree and start hanging stockings from every conceivable nook and cranny in my house. I love Christmas, I love Bill Murray, and I love the idea of the two of them coming together to be a part of the grand tradition of the Celebrity Christmas Special.

Christmas Specials have been around for many moons and have been brought to us by the likes of Bing Crosby, Frank Sinatra, Laurence Welk, Perry Como, John Denver, and, most recently, Michael Bublé. Typically, a Christmas Special consists of the artist in question taking up residence in a cottage or some other charming abode that may or may not actually be a stage and singing Christmas tunes while a number of special guests drop by to take refuge from the snow and to sing a carol or two. I have strategically placed some examples below so you’ll know just what it is that I’m talking about. This first one doesn’t have too many folks included in the Holiday shenanigans, but when you’re already featuring two of the greatest singers in history, you don’t need much more help.

I’m coming at you again with some more Bing, which is fine because he is a natural source of vitamins and good cheer (I mean, #DatVoice). In his last Christmas Special, Bing belts out some traditional holiday tunes with the likes of Twiggy,David Bowie, and many more!

Michael Bublé is a great modern day crooner and for years he has entertained millions during the holidays with his own Christmas Specials.

Thanks for all you do Mr. Buble, but get ready for some stiff competition this year in the form of "A Very Murray Christmas".

And for those of you wondering, "Okay, but why Bill Murray? He's not exactly Bublé or Sinatra over here!" Well, then that means you're probably too young to remember Murray on his old "SNL" days and one of his signature characters, the lounge singer Nick Winters. I imagine Murray will be channeling good old not-so-Saint Nick for this special; here's hoping he revists this particular gem!