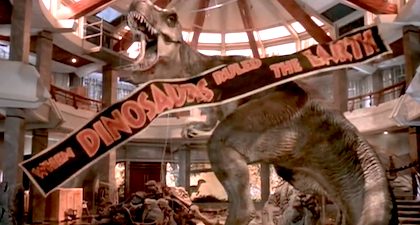 In the beginning, there were Dinosaurs. Lot’s and lot’s of bone-crushing, leaf-ripping, oil-producing reptilian-like mega-beasts who roamed the surface of the planet completely oblivious to the fact that Nature and Destiny were grooming them for stardom. Fast forward about 65 million years (give or take a millenia or two) to 1993 A.D., to a world that was about to be gifted the awesome cinematic triumph known as Jurassic Park. This was not the first time that dinosaurs and their carnivorous adventures had ever graced the silver screen, but never before had they been brought to life with such realism and ingenuity.

Drink that scene in, ladies in gentlemen. It’s a part of cinematic history that will, in it’s own right, never go extinct. Seriously, if you can watch that scene and not develop goosebumps, then I urge you to seek out a dermatologist immediately. Unless you’ve been a fossil for the past 22 years, the plot of Jurassic Park should be familiar to you. John Hammond, a Walt Disney-esque figure, decides to build a theme park that will shock and amaze the world. Using genetic manipulation, Hammond and his team are able to resurrect the great dinosaurs that ruled the planet millions of years ago. Unfortunately for Hammond, he isn’t even able to finish unloading all of his dino-clones into the park before one of them attacks and kills a worker. Afterwards, he brings in a team of scientists to observe his creations with the hopes that they might endorse his endeavors and tell the world just how wonderful Jurassic Park really is. And while the dinosaurs and the majesty that they carry with them are very powerful things, human greed is also very powerful, and as a result of it, a system malfunction allows for the park’s more dangerous residents to break free and cause havoc. Remember the T-Rex that Dr. Grant was practically throttling Hammond about in the above clip? Well, she’s just one of the many hungry attractions hoping to assist mankind in taking its rightful place at the top of the food menu.

Ah yes, the famous death of the lawyer. Only Steven Spielberg can kill someone and make it sad, terrifying, and funny all at the same time. At the center of what is one of the quintessential sci-fi/adventure films of all time are two conflicting ideas that ultimately elevate the film to more than just some dumb fun. Two voices are speaking to you when you watch Jurassic Park -- Michael Crichton and Steven Spielberg. Spielberg is showing us that there is no denying the absolute wonder and amazement that comes with the idea of seeing a real dinosaur.

And, of course, the beauty of John Williams’s score serves to punctuate those feelings perfectly. I would also like to point out that the music is in reference to our characters encountering dinosaurs. The theme is never played to emphasize the greatness of the park itself. Also, if you watch that first clip again, listen to the first couple of notes in the theme. They are dark and foreboding notes that signal the possibility of danger. Within those notes is the voice of Michael Crichton and his warnings about the danger of playing God. To resurrect a dinosaur would be a glorious achievement, no doubt about it, but when you stop thinking with your heart and start thinking with your brain, you might question whether or not if it was the right thing to do. This conflict is thoroughly explored as opposed to being abandoned for the sake of action and spectacle, which is why Jurassic Park became the classic that it is. It doesn’t just throw a bunch of ideas at you for the sake of distraction and to cast the illusion of intelligence. It allows for the audience to unwittingly engage in the discussion because they are witnessing firsthand the beauty and the horror that ultimately represent each side of the conflict. Damn, this is a fine film.

The success of Jurassic Park was immense, and as such, a sequel or three were only a matter of time.

The Lost World: Jurassic Park is often thought to be a lesser film than its genius predecessor, but that fact certainly didn’t stop it from becoming another box office behemoth. Frankly, though, I do feel I should point out one little thing that people tend to forget about this particular film. Say what you want about its quality, but at the end of the day, it was an actual sequel. The original purpose of a sequel (back when it was invented in 1462 by Gerard Sequel) was to bring audiences back to a familiar place in time and to spark familiar feelings while exploring new ideas or expanding on the old ones. The issue of whether or not man should have played God was explored quite nicely in the first film, and this sequel touches upon it again and goes even further by introducing a heavier “animal rights” aspect to the story. The hunter Tembo is an interesting character because he seems to admire the Tyrannosaurus Rex, much as Brody and Hooper admired the shark in Jaws, but at the same time, he has no qualms in hunting it down and shooting it in order to test his human might against a creature who used to occupy the top spot on the food chain. I guess the problem is that they introduce that idea but don’t go very far with it, which can be said about many other aspects of the film. But again, let me state, there was a reason to make this film, and it went beyond the idea of plopping the T-Rex into the middle of a city.

Mankind decided to screw around with dinosaurs again in 2001, when Jurassic Park III (or Triple Slash, as it is called by those that got it going on) debuted. At this point, Spielberg beat a hasty retreat from the director’s chair and took refuge in the world of Producer Land. This project fell into the hands of Joe Johnston, the man who brought us Honey I Shrunk the Kids and Jumanji. This film saw the return of Dr. Alan Grant as he is hoodwinked into traveling to Isla Sorna (Site B) to play tour guide when he discovers that he is actually on a recuse mission for a lost child. Dinosaurs appear (as they are wont to do), including a Spinosaurus who diva-slaps the hell out of the T-Rex and takes his place as the main antagonist of the film. So, with Triple Slash you’ve got bright new shiny dino to play with, along with an emphasis on the fact that the dinosaurs can communicate. We kind of already knew that before, but the film needed another reason for people to be interested in the story, so there you go. This film is also somewhat looked down upon, and, again, I am not here to play defender or prosecutor. I will admit there are some cool action set pieces amongst all the retreading, and it’s always nice to see William H. Macy in anything. Sam Neill also lends a certain gravitas to nearly everything he is in, so his presence is quite welcome as well. Also, the line “Did you steal those raptor eggs?” will go down in history as the greatest question ever asked in a film. Just think about it. Well, I hope that people got something out of Triple Slash, because it would be a long 14-year wait until the next sequel came tumbling out of the gates of Hollywood.

Well, it’s 14 years later, and Jurassic World has proven that dinosaurs do indeed rule the world, or at least the box office. With an opening weekend of over $200,000,000, it is safe to say that the Jurassic Park franchise has been rescued from extinction, and it’s been given a nice new park to play in as well. Yes, with a brand new cast, a new exciting location, and an even newer and shinier dinosaur to play with, Jurassic World has marched onto to the scene and declared itself the Alpha of the summer blockbuster season. It has already been revealed that Chris Pratt has signed on to a sequel, and speculations on what it could be about are already running rampant. This is just a wild idea, but I bet it has something to do with dinosaurs eating people. Well, one thing is for certain, and that is that the future is looking kind for Jurassic Park fans and for a franchise that is 65 million years in the making. Rawr.