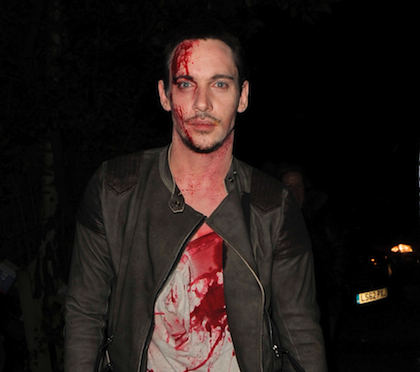 Halloween might be over, but there is still a ton of horror lingering on television!

NBC has just started airing their new horror series adapted from the renowned novel by the one and only Bram Stoker (whose birthday happens to be today!). Dracula has been adapted into a movie and remade numerous times, but this is the first time that it has been made into a television series.

Jonathan Rhys Meyers, best known for his roles in Match Point, Bend It Like Beckham, and "The Tudors", plays the brooding, notorious vampire and also produces the series. He and the other producers and writers have taken a very different approach to the tale of Dracula. You won’t see the garlic, bats, or or any of the typical ritual objects that are supposed to keep the vicious vamps away. But, there is a good amount of blood and gore that will keep all the horror fans happy and entertained.

In the series, Dracula comes to England posing as an entrepreneur hoping to bring scientific advancements to Victorians. In reality, he is seeking revenge on those who have cursed him all those years ago. His plan seems full proof until he falls for a woman, Mina, who very much resembles his dead wife. The Order of the Dragon also presents a threat to Dracula.

NBC's "Dracula" takes an interesting approach to the popular story by making the monster the protagonist. Obviously, Dracula is a monster and a killer, but somehow the audience starts to root for him. This reversal of roles, or the humanization of the notorious vampire, is an intriguing strategy to tell the story of the infamous creature of the night.

You can catch full episodes on the NBC website.