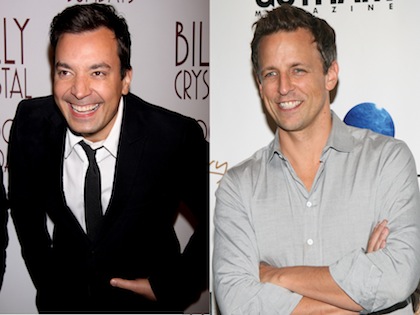 A HUGE changing-of-the-guard is imminent over at NBC late-night, with Jay Leno stepping down as host of “The Tonight Show” after 22 years (for good this time) to make way for Jimmy Fallon to serve as the 6th host of the 60-year-old talk show. This leaves the host’s chair vacant over at “Late Night”, which has followed “The Tonight Show” for the past 32 years. Enter Seth Meyers, long-time “SNL” cast member and “Weekend Update” anchor, to take over duties once held by the likes of David Letterman and Conan O’Brien. It’s a major shake-up that the Peacock Network hopes will revitalize their late-night line-up and attract younger audiences.

It’s definitely a boon for Jimmy, who follows in the legendary footsteps of men like Steve Allen, Jack Paar, and the immortal Johnny Carson. This is basically the gig that all stand-up comedians and variety hosts aspire to. And with an earlier time slot, Jimmy’s viral-minded humor and format will be able to reach a wider audience. The weight of the task is not lost on anyone, and NBC drove that point home with their just-released first promo for the new show:

(They very conspicuously glossed over Conan’s very brief and contentious tenure as host, but I’m sure everyone involved would prefer to forget about that anyway…)

As for Seth, he won’t he have quite so much pressure, as “Late Night” has notoriously been the best place to be a bit more subversive and experimental. He won’t have too far to go either – the “Late Night” set is just down the hall from Studio 8H, where “SNL” is taped. In fact, “The Tonight Show With Jimmy Fallon” will also be next door at NBC Studios, as the show is being moved from L.A. back to NYC, so prepare to see some crossover action every now and again.

As for “Weekend Update”, fear not – Cecily Strong has been the anchor-in-training all season long on “SNL”, and we think she’ll do just fine once Seth hands over the reins completely!

“The Tonight Show with Jimmy Fallon” will premiere on February 17, and “Late Night with Seth Meyers” will debut on February 24. No guests have been announced as of yet, though Seth has made it no secret that he wants his former “Weekend Update” co-anchor Amy Poehler on to help him christen his new gig! Stay tuned!