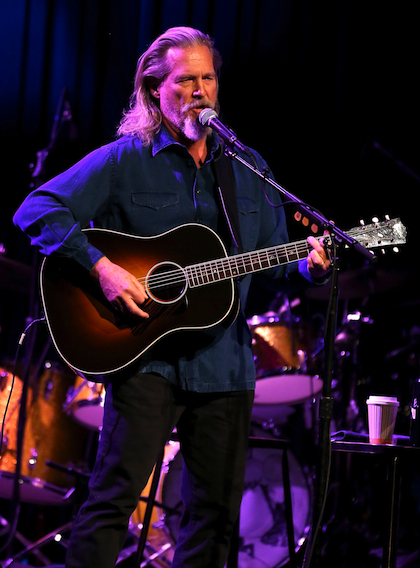 To the younger generations, the name Jeff Bridges likely conjures images of a laidbackfella in a bathrobe who’s seriously bummed about his stolen throw rug. Ever since his long-overdue Oscar win last year for his role as a country crooner in Crazy Heart (where he sang five of the sixteen songs on the soundtrack), Bridges seems to have done a reverse-Timberlake – that is, make a second career out of music.
Just yesterday (August 16), Bridges dropped his self-titled T-Bone Burnett-produced studio album; the first single off the album, “What a Little Bit of Love Can Do”, was released the day before. Check out the upbeat, country-infused jam below:
Charming, eh?
Well, Bridges’s foray into the singer/songwriter scene is especially amusing to me, and I’m about to tell you why...
Anyone over the age of 25 is probably well-familiar with a little flick called The Last Unicorn. For those uninformed, The Last Unicorn is a classic animated film from 1982 all about, you guessed it, the last unicorn. A mythical beast finds herself all alone and goes in search of her brethren; along the way, she encounters a magician, a spinster, and a Red Bull. No, not the energy drink – an actual bull that is on fire. In an attempt to save her from the bull, the magician turns the unicorn into a human, whom they name Amalthea. They take her to a nearby dilapidated castle owned by crotchety King Haggard and his studly son, Prince Lir. Guess who has a little hook-up sesh? Yup, Lir falls for Amalthea, and things get a little weird. Anyway, Lir was voiced by Jeff Bridges, who at that time was enjoying status as Handsome Hollywood Leading Man. Halfway through the film, Lir decides to express his love for Amalthea the only way a dashing young prince can – through song.
Yes, long before Bridges was growling his way through country tunes, he was serenading young maidens in this cartoon. It has stuck out in my mind my whole life simply because, well... he wasn’t the best singer, let’s be honest. However, it seemed to work in his favor, because there’s a certain sweetness in the earnestness of his voice. So, he's no Sinatra, but at least he’s sincere! In the end, that’s what makes the song so damn romantic. Check it out below:
Admit it, you’re all teary-eyed, right? It’s okay.
Obviously, Bridges’s voice has matured and refined in the ensuing years, and he’s certainly found his niche in the country genre. But for peeps my age and older, we’ll always fondly remember his humble beginnings behind the microphone.
(Photo via Judy Eddy/WENN)
- Katie Marzullo, YH Staff Editor
[email protected]