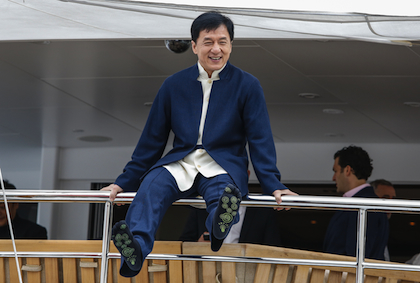 Jackie Chan has had quite a few interesting roles over the years -- Shanghai Knight, Muscles (literally, the name of one of his roles), Detective Inspector Lee, Captain Li Shang -- and now he may take on his greatest role yet: the narrator of a musical adaptation of his own life. Chan, who has admitted to being a huge fan of musicals such as The Sound of Music, is currently working on a musical based on his memoir, I Am Jackie Chan: My Life in Action. The book follows Chan’s early life, which chronicles the lives of his parents, his early education at the Peking Opera School, and his early rise to stardom through music.

Chan made the announcement during his two-day in New York, where he was a guest of honor at a Lincoln Center reception celebrating Hong Kong Cinema. In addition, he received a Lifetime Achievement Award at the New York Asian Film Festival, where his latest film, Chinese Zodiac, premiered.

The search is on for a director to helm the musical, which, in addition to focusing on his parents, will explore his time spent performing acrobats with the children’s group the Seven Little Fortunes. Chan details the experience in his memoir and does not exactly paint the happiest picture of his time with the group. I’m personally curious to see how this period of his life will translate to the stage. Although darker musicals aren’t exactly anything new, and have actually seen quite a bit of success over the years.

In the meantime, Chan is working on a follow-up to his memoir entitled I Am Still Jackie Chan, and is set to star in a New York-set action thriller, and a desert-set war drama.

Are you excited to see a Jackie Chan musical? I definitely want to!